He used to be a heavily augmented human before he accomplished his goal - become synthetic.

He was born and raised in the Upper City by both his parents who worked for Shometsu. While going to school he became infatuated with Cybernetic enhancements believing it to be the next step in human evolution. He followed this infatuation into university where it became his passion. While attending Shometsu University he became top of his class in cybernetics. However, he found the rest of his classes to be trivial and he failed most of them, but this did not deter him.

Taking the first step toward what he sees as the future evolution of mankind he was fully integrated with cybernetics, becoming a synthetic himself. 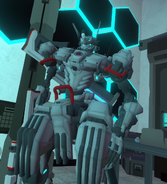