Male
Dagu is a very short animal-like dragonkin who works as an auto mechanic in Callous Row.

His gambling addiction, propensity for borrowing money, as well as a fair share of bad luck, has made him indebted to nearly every gang present in the slums. He doesn't earn much and lives in poor standards.

Dagu carries the sad story with him of being kidnapped from his homeworld and sold at a young age by exotic pet smugglers. His captors realized that he possessed a semblance of intelligence higher than animals and a talent for repairing things, so he was put into use as their ships mechanic.

When his owners were making a deal in Savior City, the large metropolis that overshadows Callous Row, he was allowed some limited freedom for his good behavior. While his captors had their lunch, he wandered the streets of the city, lead by his willingness to see it all. Fascinated by the city's sheer size, he got lost and was seperated from his captors.

Walking for hours without finding his crew he ended up hungry and alone, so he eventually asked a seemingly kind gentleman for help. Accepting this persons "help" would mark the beginning of crippling amount of debt.

Being a skilled mechanic helped him land a job working at an auto shop for Rebel Ryder. Only paid a meager fixed amount, his money goes to paying back the owner and all the remaining debt collectors that hound him.

He once was confronted by a corporate goon who was looking for information. Refusing to betray his friends he didn't give away any useful information.

Learning about Rana giving up information to the corporations he threatened to set her on fire unless she left. Before he was able to do anything Cleo stopped him. She dragged him away by his tail, preventing a fight on the open streets.

After the shootout that followed he lost his friend Samuel “7”. This was not due to the violence itself but thanks to Bethany unscrewing the injector that was protruding from his head. [1]

Got shot in the face by a Corpo and is now missing an eye. 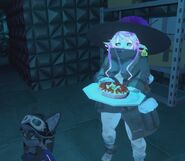 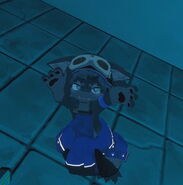 Cornered by a Mars corporate droid 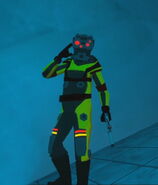 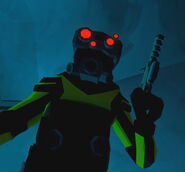 Dagu mourns the remains of Samuel “7” 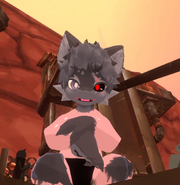 Dressed for battle in the thunderdome arena of Scrap Town 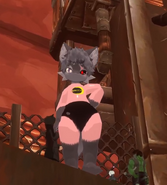 It that shirt supposed to say "Sonitii"?