Not to be confused with: Crocolol

Crocolols is an Augmented Lizardfolk and was known as the Mayor of a run down city for 7 years, succeeded by a new up and coming politician, he regained it again after a long legal battle but lost it once more to the same politician.

He used to have what he claimed was a "30 women army" of bodyguards that took turns to guard and escort him wherever he went when he was at his peak of being the mayor. When roaming the city he had his sights set for a new robotic opponent and his establishment. Accusing his bar of trafficking, prostitution and tax fraud. he managed to confiscate it once. After a legal battle he was proven wrong and lost the rights to the bar. Then was defeated by his new robotic rival thus making him retreat out of town.

He returned working for a new organization to get revenge on said robotic rival. After being defeated YET- again. He moved out of the town permanently to find a new life where we find him now in the upper city working for Sonitii as the new “Head of PR” 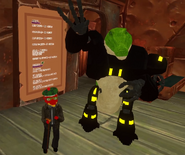 Genuine dining can be found here

Pained by the thought of eating artificial WOTO cubes