Corowna is a roleplayer and VRChat streamer, known for their various characters.

Aegis asking Fable if they can make book out of him

Fable Anders getting smacked by a big tail

Fable falling from the sky

Fable the master of the flux

"I just started off as a member of Grape Gardens aka the Chaotic family outside of that I was a every good thief until I was given some information about a sword that could lead me to Infinite wealth so I went searching for the sword it took a while to find it but I did I found it in a warehouse full of guards I managed to sneak pass them and found the shipping container it was in and found the sword as soon as i saw I couldn't help but grab it like something was pulling me towards it then I grabbed it without thinking and heard a voice a deep gravelly voice say "Finally a new host" the moment i heard the voice I was terrified and dropped the sword it made a lot of noise I panicked grabbed sword and ran then the Alarms went off "SHIT" a guard sees me and I black out woke up to 12 people slaughtered there body's completely ripped apart like a monster ripped them apart then the pain kicked in every muscle in my body was aching but I continue running again fast as I could until I save safe and went home and rested for the night."

The Don found out about Corowna death because he left apart of his soul on Corowna a while back. That's why Corowna has white hair now, but when he found out that Corowna died he asked his uncle that he hates to help him bring Corowna back to life but his uncle asked the Elder Demon to make a contract to bring Corowna back. If Corowna was brought back to live, normally Corowna would've been a Husk/Zombie so he made this offer; "I'll give you life back but you'll become purgatory it self and the Nephilim must die", That was the contract. So Corowna accepted it and became purgatory it self.

The Don Vs The Renegades

After becoming Limbo, Corowna decided to space herself off from everyone that she knew so she could continue doing her job (guiding the lost souls to their final resting place) This was to help Leviathan (Judgement) do his job more fluently. Because of the different perception of time in limbo she was able to do more on the material plane, and be in multiple places (2) at once. Then realizing The Don found out about her death from Hybris and SciFri, she knew he would kill them at a moments notice.

So she decided to join The Don's side with the intent of keeping at least one of the Renegades alive. When she joined into the fight she was told to fight Arcadum, but she was untrained at the time so she didn't know how to fight a being that was constructing bodies without the use of magic, but using sheer willpower instead.

When fighting Arcadum she was slaughtered before she had the time to react. After this her body would be reformed, she had however succeeded in keeping Arcadum at bay, even for just a moment. At the end of the fight she managed to trap The Don within a hidden space in Limbo.

The aftermath of the fall of the Renegades

Leviathan found out how easily Corowna was beaten and forced her through extensive amounts of Training, often resulting in her death. Teaching her how to reform her body as quickly as possilbe. In doing so her willpower was increased. After the training she decided to go steal a large collection of items, and finding information on as many hidden places as possible. During this time she ended up finding a place with a small group of travellers, this place was called Anthor.

At first it seemed like just another reality, another adventure to go on, but it seemed Anthor had a mind of it's own and wished to make it's own story. Corowna kept tabs on the place but wasn't prepared to interract with it just yet.

At some point Corowna met Nano, who was just an ordinary human at the time, and was trying to be a "Guardian" of sorts for this ordinary person.

After a while Corowna met an entity known as Beedle Vaughx, a very strange entity but Corowna was very interested in the way he acted.

Shortly after Corowna met Beedle Vaughx, Nano was killed by The Don. However since Nano had a star phoenix feather bound to her soul she was "reincarnated" as a Star-Phoenix.

After this Corowna as well as the Archangels are sought out to train Nano. Corowna was in charge of teaching her how to unlock and properly control her powers. One of the exercises Corowna put her through was flying through a labyrinth of doors at high speeds, however the newly formed Star-Phoenix was not used to high velocities and ended up dying and reincarnating quite a lot.

While Corowna was training Nano, Corowna's mother (Tenebris Bellator) found out about her daughter's death. The result of this was Tenebris mentally falling apart but shortly after she found out that Corowna's sentience became a part of Limbo. And so she decided to find Gilgamesh and wish upon The Holy Grail. When Corowna found out that she was doing this, she tried her best to stay hidden, not burdening her mother.

Corowna was resurrected by The Holy Grail and given a second shot at a human life. While being human Corowna mostly went back to her old ways of stealing, but after a while things started happening.

She reformed her old friendships and bonds, albeit she did not manage to fix all the damage she had done, leaving a few scars. During this time Leviathan (Judgement) lost control of himself due to a massive influx of corruption, the result of this was him becoming imbalanced and causing the death of a planet, but while this planet was dying Corowna and a few other people were trying to stop him.

Corowna not being able to do anything was left with a last resort: The blade of Arkul. This blade was hidden from the Archangels and stored in Limbo. So Corowna pulled the blade with the intent of regaining Arkul's powers. But in order to do so a deal had to be struck. The cost of this deal was for Corowna to take on all of the dragons curses and also to work with him to survive.

After stopping Leviathan with the blade, Corowna decided to seek out Anthor and explore it. Finding magical items as well as improving in terms of combat ability. While travelling through Anthor Corowna noticed the world decaying more and more every day. And decided with her newly formed party to cure this world, by killing it's inhabitants.

While searching for relics and items, her other party members were crafting items to try and destroy Archangels and Arch-demons of Anthor. Corowna found many relics, but one item in particular had a being locked away in it: It's name is Diabolus. It turns out this being was the ruler of Anthor. Corowna and the party decided to put him back on the throne by aiding him in the Extinction. After a long while Corowna starting getting boons from multiple deities, One of these being immortality from aging, now that Corowna had all the time in the world (literally) she decided to use it for exterminating the rest of her party slowly. This was due to them conspiring against Diabolus, and take his throne instead.

Diabolus and Arkul were not really fond of each other but worked together to put Diabolus back on the throne, as well as ensuring Corowna's survival, but they were not fond of the way Corowna was acting on things. She was becoming more and more twisted/psychotic by the day. She slowly murdered the rest of her party in horrific ways, and at the end of it all she killed the last person remaining on Anthor.

After wiping nearly all life off of Anthor, Diabolus could finally claim his rightful place, and become the world once more. In doing so he gave Corowna his loyalty, and made her a new realm known now as "The Thieves Den" and hid it from the rest of the planes. After this he buried her party within a hidden section of the newly created realm, Blood lilly field.

Slightly after returning to the main world from Anthor, she met new people. Whitewolf, Kyou and Karakov. They became quite close, especiallly Karakov despite all their differences. Slightly after this another being appeared: Naru the Shapeshifter. Naru started manipulating Karakov slowly, sadly Corowna was too late to stop him and Karakov decided to "kill" Satchi along with himself.

As Corowna tried her best to stop him she realized that Karakov was too far gone. Satchi however survived due to Karakov temporarily gaining his sanity back and Flesh-Weaving a new heart. After this Corowna grieved, and things were quiet for a while.

During the "silence" Purple Lotus officially opened their doors for the first time. Corowna was a regular at this newly opened establishment. One day she encountered the eldritch being known as Vok. Vok seemingly remembered Corowna through Karakov's memories, this caused them to quickly become close friends. She went exploring for a while meeting many beings of power, and leaving sticky notes on the Archangel's fridge.

The sealing of Vok

Through her endeavors she remained oblivious to the fact that Vok was consuming things and gaining more and more power. So she sought out a way to keep him alive. However the only way she found to keep Vok alive, was to seal him away within her own being. Vok was handed over to Corowna by the Elders, who asked her to seal him away. From that point on Vok was sealed away inside of Corowna.

Corowna the Messenger of Elders

Slightly after sealing away Vok, Corowna was approached by Dagmar The elder of Elements, and asked to be their messenger within the universe. Corowna accepted the role, but a sacrifice was required: The mind of Arkul. This would turn Arkul into a raging beast. Corowna was hesitant at first, but after some time she decided to sacrifice Arkul's mind. After this Corowna once more decided to venture out.

The death of Vok

A few months after Vok was sealed away within Corowna. Corowna woke Vok to strike a deal. He would be let free if Corowna could remove all of his powers. Vok hesitantly accepted the deal and was let out of Corowna's seal. Corowna said her final goodbyes to Vok as he left.

However Respawn stopped Vok at the front door. The two conversated for a while about the Eldritch. Then after Respawn had gained his information, Vok turned around to say goodbye but was impaled from behind by the Danger Blade. An Eldritch slaying sword. Corowna panicked at the sight of her friend being brutally murdered right before her eyes and mentally shut down for a short period of time. After this she spent some time tracking Respawn and eventually seized the Danger Blade.

Corowna Bellator standing by them self

Good Times with the Archangels 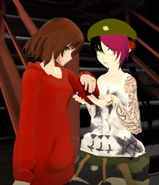 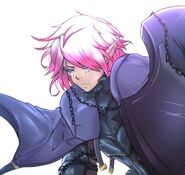 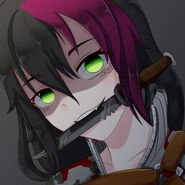