Owner of "The Golden Crown"

Cornelius is a large dragonoid type creature that works for the Masaru corporation as their head of security. With their altered body, Cornelius will try to keep The Undercity in check with an iron fist. He is portrayed by Cece.

Being a draconic-looking humanoid sorcerer he used to run his own shop "The Golden Crown" in The Row. He comes from a rich family which sheltered him most of his life because of his draconic features.

Wanting freedom, he estranged himself and eventually found work at Masaru in the Draconic Research Division. Cornelius came across an ancient Tablet piece that could potentially prove the existence of dragons and fled Masaru to hide in the Undercity.

After spending time in the Undercity, Cornelius was presented an opportunity to come back to Masaru by Friend. Negotiations to work under the current overseer of the undercity, Norman, were going smoothly until he attempted to assassinate Cornelius in the lab. Cornelius barely survived, losing an arm in the process. After receiving an apology from Damien the CEO, Cornelius was paired with Friend to oversee the Undercity in Norman's place.

Overtime he went on numerous excursions and missions with Masaru, one notable encounter being invading the Necromancer's lair in the Undercity. From that mission Cornelius was able to harvest parts of a gargantuan dragon skeleton. Using these pieces he was able to work with  Avalon to grow his arm back into a more draconic one.

As the month progressed he became close to his Masaru compatriots, his allegiance strengthening with the company more than the denizens of the Undercity that were kind to him during his stay. With the death of Jeremiah, the Head of Security at the time, he no longer wanted to be weak so that he could protect his friends. Cornelius underwent an incredibly risky gene altering procedure using the pieces of dragon skeleton he gathered to turn him into a brute of a man. His form had turned mainly draconic and humanoid, sporting armored skin, claws, and a dragon head.

With his newfound power Cornelius risked his life along with others on the Space Mission to fight off the aliens, losing it but reviving due to the Lazarus process.

Cornelius is now the new Director of Security and Emergency Responses, ready to enforce order in the Undercity with an iron fist.

Cornelius carries the body of Phyllis outside after her and her daughter Emilias deaths. 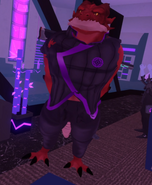