Mayor of The Row

Brown
Coach Eric works as a banker and civil servant in The Row, the shady slums that lie in the shadow of the futuristic metropolis known as Salvation City. He recently got appointed the position of Mayor.

His allegiance is in question at times since the power structure of The Row is constantly in motion and the governance lacking. Being appointed the position of Mayor does not count for much when you're not elected and the inhabitants don't really respect any authority.

Although aligned with the corporations on paper since they won The War of Unification, his heart and allegiance remains with the Union, wishing for them to return to power once more.

Coach used to be a liaison between the Union and mega-corporations, managing projects in which both parties would have a vested interest. He primarily functioned as a mediator helping to find common ground. As the balance shifted, Coach found himself going from keeping the Corporations in check to having to struggle to secure an even exchange for the Union. There was no use for Coach after the war. He had no one on either side to vouch or attest for his character either when it came to switching careers. When you are friends with everyone, you don’t have any good friends. Falling off horse after horse has landed Coach into The Row.

After the end of the quarantine Eric met Rook, the half-orc proprietor of the local bar "The Grindstone" and judged him to be working in the same direction as his own interests. He accepted to help him locate a package from the megacorporation Shometsu, held at the bank. Unbeknownst to Eric, Rook organized a bank heist where they would retrieved a package from the bank even before he was able to deliver.[1]

Days later he would get back to Rook and hand over the package that he believed Shometsu had been after. When they met he questioned what Rook was trying to accomplish with these one off killings of corporate droids and goons, seeing as Rook had performed a robbery. Meaning that the corporations would just be sending more manpower into The Row. In exchange for handing over the package he asked for information, staying up to date with events on the streets. Rook accepted.[2]

He at some point recruited the prostitute and streetwalker Becky Cantuckit to work for him at the bank office. She has since cleaned up her wardrobe.

Following a corporate presence in The Row that resulted in many injured and damages he managed to break a deal for some sort of peaceful solution with a high up corporate figure named Kei Noriaki. Kei who works for the Masaru corporation wanted to purchase contracts of local assets and vital businesses in the slums and make his corp the dominant one, replacing Valkyrie current hold. In exchange he promised an interest in helping the people of The Row.

Coach Eric wanting nothing more than bring calm and peace between both corporations and ex-union folks and let bygones be bygones he appears to have agreed though this is unconfirmed. Working together with the corporations has earned him a bad eye from some inhabitants. Rook, the local leader confronted and threatened him publicly in the bank telling him that he must cease his talk with the corporations completely.

Following the GEB Corporations presence in the row and having one of their scientists murdered they demanded an ultimatum from the governing mayor. That he would bring the responsible to them to face justice within a week or else GEB would cease delivering supplies of food and clean water to the row.

A corporate individual from the Shometsu Corporation, known as Lange Pliskin paid him a visit. Eric struck a deal with him to purchase property and place investments into the row. His reasons for doing so were questionable but the good mayor went along with it regardless.

Rook eventually placed his trust in him and revealed the existence of his secret organization The Shattered Legion. This was when a citizen of the row was kidnapped - namely Bo. The half-orc helped organizing a squad to infiltrate the captors responsible and mount a rescue.

Together with Fandiarius Sharborough, Faye, Alexander and Felix Dolore they infiltrated the Avalon Corporation and managed to rescue her. Tricking the Avalon scientist Dr Luscious Hambone Eric no undoubtedly no longer has a good standing with them.

Eric was present when an interrogation of the suspects responsible for Bos kidnapping was held. The suspicion was at first pointed towards both Lange Pliskin and Rana Amariah but Eric later vouched for Lange, having business dealings with him that should have revealed any involvement. With Bo passing judgement Rana was sentenced to exile and to be released into the wasteland outside of Salvation City to fend for herself. 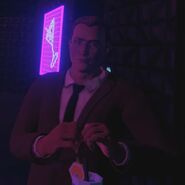 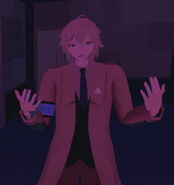 Handing over a package to Rook

Eric at the bank 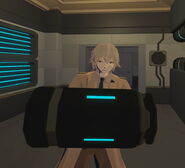 Retrieving a canister from a Valkyrie Drone 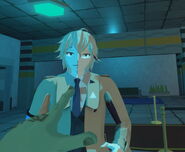 Threatened by Rook for his involvement with the corporations.

Disposing of the package last minute before completing its countdown which revealed it to be explosives. 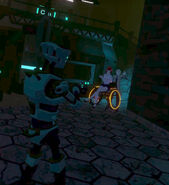 Dining with Kei, Harrison and Becky at the sweet shop.

Dining with Kei, Harrison and Becky at the sweet shop.

Meeting with Giovanni and the limping Alfons

Typing at his desk

Faye aks Eric for help to locate her parents

Stepping in between a skirmish between Shometsu and Valkyrie forces.

Calling a truce towards Valkyrie forces

Eric and Faye disguised for a mission

Passing by the Avalon Corporation checkpoint