Red
Ciara is a Necromancer and Dark Sister living at Talaris in the UpperCity. In Season 1 she worked as a Teacher in Callous Row overseeing basic education. After being left for dead by her fellow mages, Ciara seeks retribution upon the denizens of the Undercity. After an attack by Bo, Ciara turned to Talaris for protection and was hired. She is portrayed by Mhai.

With the quarantine of Callous Row finally lifted, Ciara Ní Éabha returns to her troubled city seeking out her last class of students where were dispersed to the camps. Finding only Viana, Ciara gives her graduating lesson before reconnecting with other residents to recruit her next crop of students. With the expectation that her ATLAS-funded but non-affiliated school would be allowed to continue, she acts as a normal citizen when in public and speaks well of her philanthropic benefactors.

Secretly, Ciara feels lost in a world that she cannot embrace. Only her obsession with magic, and the tiny stipend of her tutoring, keep her sane. Her love of the unknowable lead her astray and granted a renewed purpose. This drive is a dark energy that fulfills her corrupted need to educate and care for her charges. Now she serves a new purpose that taints her love of educating her beloved children. After being left for dead by her fellow mages, Ciara seeks retribution upon the denizens of the Undercity by turning them over to TALARIS for experimentation and expanding her Dark powers.

Careful to keep her growing delight in all things magic hidden, she does her best to present the perfect citizen to retain her tiny income with the constant worry that she will be discovered.

With the quarantine of Callous Row finally lifted, Ciara Ní Éabha returns to her troubled city seeking out her last class of students where were dispersed to the camps. Finding only Viana , Ciara gives her graduating lesson before reconnecting with other residents to recruit her next crop of students.[1]

Ciara helps Rook, the owner of the Grindstone, with researching a mysterious box of ammo that he 'acquired' previously. With the help of Ikelos, the type of corruption is identified, for these are mage-killing bullets.

Unfortunately Kythus betrays his fellow mages by tattling on Ciara and seals his fate with the vengeful teacher. In the overworld, Ciara tells an inspirational story to Angelina, a new student. Hot dogs are devoured, fights are attended, and plans for the Dark Sisterhood's first actions are set in motion; for who will defend the downtrodden mages if not themselves?[2]

Tracked by an assassin, Ikelos is struck down in front of the Coven. Moving to eliminate witnesses, both Kythus and Ciara are shot. Ciara dies from her wounds before the entrance to the Coven.[3] Finding her corpse within the Hospital a Power calls to its kindred and resurrects the newly born Dark Sister.[4][5]

The End of All Things

Left to die in the finale of Callous Row Season 1, Ciara turns upon her fellow mages and fellow citizens of the Undercity. Denied her full power by Bo, she moves to the Undercity to live near the remains of the Necromancer's temple. Therein she excavates the ruins to extract and research the artifacts left after his defeat. Angie joins her favored teacher and together the new Dark Sisters work to uncover the secrets of Shadow magic and implement their plans to 'save' Callous Row.

After assisting in the murder of Kythus, Ciara is attacked by Bo in the Coven. Fleeing with a severe injury, she arrives at Talaris seeking sanctuary. After an interview with Damien, Ciara is chosen to join the corporation who served as her enemy. With their help she plans to turn her attention to exacting revenge on the Undercity for their attack upon her life. Vengeful and angry Ciara will make use of her intelligence and connections to bring suffering upon those who hurt her. 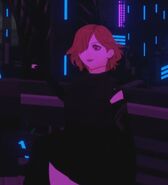 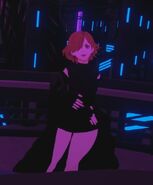 Ciara and Ikelos held at gunpoint by Rook and Charles Rask 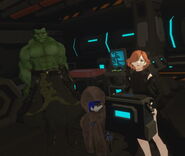 After interrogation and questioning they're entrusted with the package.

With Hadwyn on a rare visit to Scrap Town 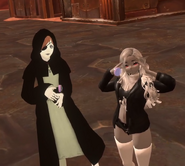