Chow is a human who works at The Purple Lotus and is the left hand man to Satchi. Chow works as Purple Lotus’s staff hiring and recruitment manager. He uses void equipment and has received a special sword after placing in the top 3 during an Archangel tournament.

Chow is one of many people to have joined The Purple Lotus as a staff member. He joined early on and quickly rose up to become Satchi's Left Hand Man while Seth serves as his right.

During a mission to help recover Mhai's sword from an evil mafia boss Chow, Noru, and Seth went with Mhai to reclaim her sword from the crime boss. During this mission Chow helped fight off many of the opposing mafia members using a machine gun to mow them down along with causing civilian casualties by destroying a building full of drug addicts. The group was able to eliminate the mafia and recover Mhai’s sword successfully.

Chow entered the Archangel's first tournament competing with many other high powered individuals. Chow was able to successfully complete most of his fights but was defeated by WhiteWolf landing him in third place by default due to the other contestant forfeiting. As his prize Chow was able to choose Valor as the Archangel to train him and was offered any relic of his choosing from Gilgamesh’s vault.

Chow is a very cheery individual often cracking jokes and having fun while working at The Purple Lotus. He does have a serious side being the staff lead to take command of them and the patrons when it’s needed.

Blob is a small light blue slime in class 3 of  Arcadum's Forbidden Knowledge RP Group. They were the only slime creature within the series. They were able to help their classmates greatly in the first test by absorbing slime and walking along a windy bridge by sticking to it. 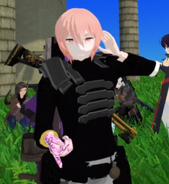 Chow ready for the Archangel Tournament.