Not to be confused with: Chipz (Disambig)

Married to Nuts (Season 1 only)

Chipz is the main-character portrayed by StealthRG. This article documents his the older legacy RP from Season 0-3 from early 2018.

These seasons took place in an alternate timeline to the current canon Chipz lore, and as such is not applicable to any of the current ongoing roleplay, or any of the events from Season 4 or 5.

The first major public appearance by Chipz was on January 1st of 2018 when he was recorded singing in Time Square by a spectator. After this initial incident, he was seen performing public serenades all over the world, in bars and clubs. During one serenade session, he was confronted by several people all vying for his affection. One of them, Emiyuh, stepped aside and offered to organize a competition between the others. Despite being the favored contestant and a friend, Mewpix was ultimately rejected.

After this setback, Emiyuh convinced Chipz to go on a date with another of the contestants, Nuts. Despite coming off very strongly, and initially being off-putting to Chipz, they slowly began to form a connection, despite the meddling of Roflgator. After several dates, adventures, and drama flared by both Rob and Monika -who also had a thing for Chipz- the two were eventually engaged and wedded. Their wedding was one of the most talked about and televised wedding events in VRChat, with more than 8000 viewers in some platforms. The couple adopted Nanoade, and Chipz made more friends, and for a while, all seemed to be going well. However, their time together was not meant to last. Monika began to pursue Nuts after the wedding, and Roflgator began sewing dissent, spreading rumors that Nuts was cheating on Chipz with her. Finally, their relationship hit its limit and the two divorced.

recognized for a long time. The next months were a mess, with Chipz going on "friend dates" with many people. Rob disproved greatly of the Harem lifestyle, as did Drekwiz- who made allusions to the "School Days" anime. This eventually led to Roflgator declaring 'war' against him. In his campaign against Chipz, Rob bars him from the Great Pug, and begins defaming him, however, none of his efforts seemed to be yielding results. In the end, Robs resorts to attempting to murder Chipz by leading him into a trap, but even this ultimately fails due to his Vampirism. This attempt on his life sparked a change in Chipz, and comically backfired in Rob's face, because it causes him to become 'alpha' as Rob put it, greatly increasing the number of girls in the harem. During this time, we are introduced to Club Rogue for the first time.

In The Pug, Chipz went gun-mad for a short time, shooting several people in an effort to hunt down Satan, who then appeared as Mecha Satan who was defeated in a shootout with the help of the #1 Holy Boi WolfyGV, who was able to ascend and settle the deaths with "Papa", coupled with Healing Magic there were no fatalities in the end fortunately. Sometime after this, Chipz had a talk with Nanoade about how she was adopted, ending in a very heartfelt moment. "It's me and you against the world."

The Harem ended around this time, with Ayytrox slowly gaining more favor. By hooking other members of the Harem up with other people, she became the sole love interest, and eventually, Chipz and Ayytrox began dating.

Chipz and Ayytrox's relationship was relatively smooth to begin. Ayytrox took in Nano, and they both adopted another daughter, Helen Keller, even having a child of their own together named Libid. While at the Pug, allegations came up against 'Uncle Hydrand' involving some questionable photos of Libid's 'husband' Odomfire, which lead to Chipz declaring him 'Family' now, though not adopting him so much as taking him under his wing. Chipz kicked down a bathroom stall door and held Hydrand at gunpoint until he could be detained by police and held on trial, where he was found guilty and sent to prison. After this, Chipz is asked to look after Rob's club while he is away for a while, with a Chip being put in his arm to sway his actions more in line with what Rob would do in the situation. Rob 2.0 as this was

later refered to as took over operations of Club Rogue for a time, causing issues with the Police involving the unconfirmed age of Rob's dancers, and offering free drinks to everyone in an attempt to run Rob into the ground, acting as Rob would towards anyone else ironically. This ultimately culminated in conflict with Morgan, eventually leading to a saber duel where Chipz left hand was cut off. (It is uncertain if this is actually the current Chipz the plot follows, or if this was an Alternate Chipz, as we are aware the Multiverse is canon, and Chipz does not have a robot arm after this point in the story). Chipz and Ayytrox at some point manage to travel to one of the many alternate realities to the night of Chipz and Nuts wedding, where they storm the altar with guns and try to convince the two not to wed, reiterating various points Rob had used against Our Chipz so long ago. The two did not listen, of course, leading to Chipz shooting this universe's Chipz, before they both fled. Nuts confronted them later in an alleyway in tears, asking "Why?". Chipz said that it was best for everyone he was dead and that she would move on, before him and Ayytrox left that Universe back to their own. In the end, Chipz's own nature led to his relationship with Ayytrox collapsing as well. Given his own upbringing, Chipz wanted to make sure life was as smooth as possible for his children, pushing himself and working almost constantly, hardly even seeing his own family, which lead to her leaving him. 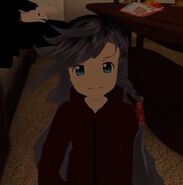 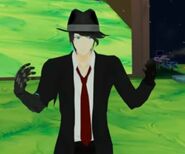 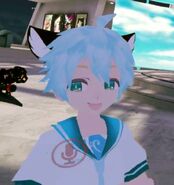 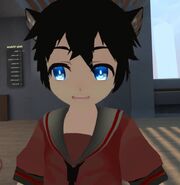 Short Chipz (AKA Sora (StealthRG)); also used when not RPing and just hanging with friends
Community content is available under CC-BY-SA unless otherwise noted.