Not to be confused with: Chipz (Disambig)

"Have you ever heard the phrase "Love is a battlefield"?" ― Chipz to Ryder

"If we can't have happiness because we're afraid of pain then we're never gonna be happy." ― Chipz to Vevina

"One thing I know is.. I hold to my morals. I don't compromise those for anybody." ― Chipz to Vevina

Salt and Vinegar (By Willow)

Chipz Ashen (In the CAF Files)

Chipz is student of Ascension Academy, a military academy run by the Cross-Allied Forces where soldiers were trained to battle evil entities and protect those who can't protect themselves. The story covers the 4 years of training and learning Chipz and many others went through starting in 2119, 300 years before the Present Day Metaverse.

For more information about the school and its characters:

Much of Chipz life before coming to Ascension Academy is unknown and has only been alluded to during conversations with other students, and briefly in a flashback during The Culling. This information is liable to change in the future as more information is revealed and expanded upon. Some information may also be slightly speculative, as Chipz tends to beat around the bush with his history and implication is heavy. These moments have been called out as such in the text as they come.

Chipz grew up in a small village north of Saigon with his mother and father. It has been implied he may have also had at least three siblings as he referred to himself as a 'middle-ish child' but it has never been clarified. His parents were both musical and he learned how to play guitar from his father, who also gave him the very same guitar he still uses during Ascension Academy. They also tended chickens, and he helped cook a little- mostly only being allowed to crack eggs. When Chipz was roughly ten the village he was in was attacked by vampires and his family was killed. He was taken and turned either during or shortly after this event. While not directly stated it is implied he also used his mysterious 'ash magic' at this time as well given the intensity of this moment and the fact that the vampires refer to him as 'The Ashen'.

After Chipz was turned by Tess he was put into a squad to train under Godfrey for ten years alongside twenty other vampires- both Pure Bloods and Half Bloods alike. Out of them, Chipz, Victor, and Genevieve were three of the roughly five who survived, and were all close. The training was rigorous and brutal as they were forced to endure hundreds of forms of torture and death to build up a resistance to them, to numb the recruits. They were drowned, burned alive, and maimed repeatedly- every possible method of torture or weakness was exhausted, even tickling. During this time Chipz was also trained in strategy and combat, becoming adept in at least three combat forms and with a rifle. While the other recruits were taught to use their natural and magical abilities as well, learning to control their vampiric charms and blood magic, Chipz was forbidden from learning any form of magic, likely due to the volatile ash magic he is capable of. The whole time Chipz was targeted by the other recruits for his 'special treatment' and they frequently attempted to murder him or get him killed. During all of this his close bond with Victor was forged as Victor took Chipz under his wing for an unknown reason, warding off the 'bullies'. At one point, as is standard for vampires in training, Chipz was starved and locked in a cage with several captives, with the expectation that he would snap and feed from them. Chipz however blacked out and lashed out, killing the vampires present instead and demonstrating a unique ability to 'aim' his rage in these normally out of control moments unlike most vampires.

Victor and Chipz, and presumably other survivors of their squad, were deployed on various missions during their training, the details of which are mostly unknown. They have both stated that they were sent to hunt down rogue vampires, either Ferals or those in the process of turning into Vargheists, in the past. They were also sent on scouting missions regularly to keep tabs on human settlements close to the Dark Lands. On one such routine scouting mission the other members of their unit were seemingly corrupted or put under the influence of something that caused them to not only slaughter the villagers but also attack Chipz and Victor. While speculation, the cloaked figures their superior was seen talking to before he and the rest went mad bear a striking resemblance to the shadowy figures that were within the Crypt under Camp Cari during Ascension Academy, which potentially means this had something to do with The Darkness. On this mission Chipz and Victor were forced to disable their fellow vampires and allowed a mother and her daughter to flee the slaughter.

Chipz wakes up in the bus stop after arriving at Ascension Academy with many other students and meets several friendly faces including Vevina the Bugkin and Esmae the Spirit. His first few days at the school are mostly peaceful as he and the rest of the students get to know one another through various bonding exercises as well as becoming familiar with the layout of the school. Chipz is a natural troublemaker however and very quickly ends up in various messes of varying levels of severity. His efforts to teach Rook about life end less than successfully with several of the other students aggravated at him for causing Rook to act so awkwardly. A joke gets out of hand and many of the students become convinced someone has been peeing in the pond in the middle of the Dorm area. And Chipz activates the alarm on the Barrier protecting the school by trying to lean on the bubble and falling outside.

These light hearted antics soon fall to the wayside as Chipz, Rook, and Esmae discover something far more sinister hidden within the School. Chipz is drawn to the doorway of one of the closed buildings and upon entering with his friends they discover a vast pocket space, dark and speckles with corrupted red leading up to a towered red portal. Upon entering they are transported to a cave system and discover another more physical doorway sealed shut by magic and metal. Chipz is drawn to the door as it whispers to him, and he rests a hand against its surface. Just then the teachers storm the caves and the trio is forced to hide and wait for them to leave. Professor Von however stays behind and they see him speaking in tongues to the door before they flee.

Chipz is certain after this that the teachers, specifically Von, must be trying to release something from inside the doorway, especially after they trail Von one night and catch him meeting with shadowy figures in a graveyard where he once again speaks in tongues. He confronts Von on the roof of the school when he catches him doing something to the Crystal and Von snaps, ripping his mask off and yelling for him to leave. He needed to know what the teachers were hiding, he was sure of it now, but he regrets he may have to burn his second chance at life to do so. He assembles the other students to pass on his thoughts before continuing his efforts.

As the weeks carry on the students are put through more bonding exercises. Chipz' hunger almost gets the better of him however during a larger gathering, where he nearly snapped several times before he was able to escape with a new student to somewhere quiet. Before they could even talk the Professors showed up, convinced Chipz was going to feed on Rin. Finally however, the day came. Chipz was placed in Ignis Squad, along with Esmae, Rook, Victor, Speca, and Vevina. TBC

At the same time of the 99th Hart ball, Chipz, Victor and Llynn are camping in the woods near the Dark lands, Llynn tells them that they should still be careful even if they are near their turf because monsters may come and it could be dangerous for a starved vampire. Chipz comments that Victor can protect them and Victor responds that Llynn would be more than enough. Llynn ask of the objective that Chipz has to attend the culling, he responds that he's looking for a way out. She responds that vampires should be grateful for their gift saying that if they leave the world to the humans the world will go to a destruction path. 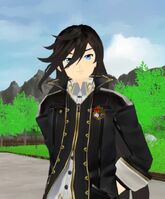 Past Chipz at the Ascension Academy talking to Heather Frost.

Royal Honey delivered from Vevina's kingdom as gratitude for learning the effects of alcohol on their species.

Offering a bottle of Royal Honey to Rin. 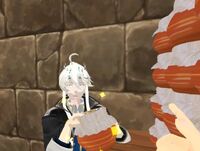 Eldrin caught stealing one of Chipz bottles of Royal Honey.

Chipz giving a hand to Vev

All of Ignis at the Speca party

Chipz contribution in the Crypt mission

Summoning letter for the culling

Chipz and fish with Alcohol 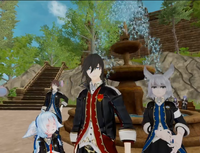 Chipz preparing to the encounter with the pineapple man.

Chipz talking to Lnik at the range arena

Chipz after being caged with Lnik

Chipz chilling in the cage

Moment before getting trapped 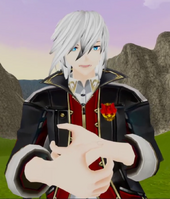 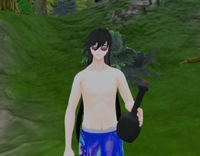 Chipz in the beach 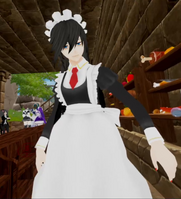 Chipz in the maid event

Chipz talking about the spider milk to Misty 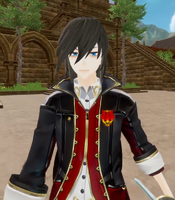 Chipz and Vev checking Narali in her bunny form

Narali, Vev and Chipz together in the relaxing room

Chipz decision his Tree lore with the drama club

The Drunken Tree providing shade and drinks to the people

Chipz in the Aldoria Camp

Chipz fighting a Wickerbeast with his Scar.

Chipz telling Vev about the dangers of Hypnotism

Chipz and Vev after the Hypnotism session

Chipz deciding what to do with the unconscious Ryder

Chipz trying before trying to perform a surgery to Ryder 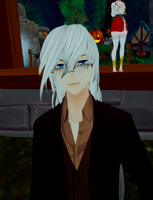 Prof. Snacks in the costume competition

Chipz and Shizu in their Glamour costumes

Chipz and Vevina on Spirit Week

Chip offering the taco to Timmy

Chipz thinking about waifus on the bathroom

Chipz and Ignis helping with the tents

Chipz and Esmae on the main hall

Chipz asking to let the training rally be evacuated

Chipz in his new uniform

Chipz in his dream during the events of Chains of Purpose 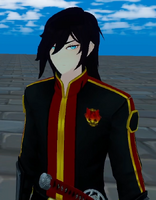 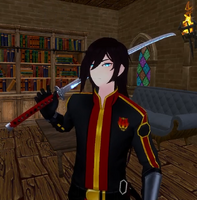 Chipz in his combat uniform wielding his Scar.

Chipz with an injured arm

Chipz's outfit during the Hart Ball.

Chipz getting coached by Yori Mersion