Designation CHESH-IRE (Combat, Heavy, Entry, Stealth, Hazard - Ire) Known simply as Ire or Chester to those close to him is Avalon's attempt at creating the perfect stealth unit. Considered a failure by the project due to his personality his facility and him were set for termination yet he was allowed to escape by his creator "Alice" He escaped to the outer rim living as a guide in many worlds for those who are lost, yet now returns to Hellion as Avalons contingency a body degradation effect on his body which he calls a curse has forced him to find a solution to keep his freedom.[1] 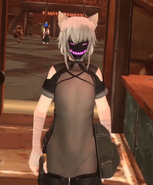 Ire and Wisp purchase a pistol from Sten for Kaida