Not to be confused with: Charles

Charles is an orc hunter who lives in The Row. He travels outside of the walls of Salvation City to The Wasteland to hunt meat for his butcher's shop as an alternative to GEB's produce.

When he isn't on the hunt, he works to aid those he calls friend and ally.

Charles was born in the slums and raised within the walls of Salvation City and later in the wilds outside the walls. He and his parents were part of a small orcish mercenary band and community who had been tasked with securing and establishing a safe outpost in the wilds around the city in exchange for partial ownership of the land they would claim. The project seemed a success at first. But reports took time to deliver back to the project's leaders and as such, when the company was bought up by GEB and they saw that no real progress had been reported for over ten years since it started, the funding was cut and the project was abandoned. Not much is known of the events that lead to the final end of the colony itself, since there were supposedly no survivors. Except for Charles, who came back to Savior City, hardened by the events he had to go through. He currently lives with the shame of not having been able to stop what happened.

He became somewhat of a hired muscle for Rook whom he shares kinship with for their Orc heritage. Living his modest lifestyle Charles aims to set up a functional outpost in the jungle and get revenge on the GEB mega-corporation. 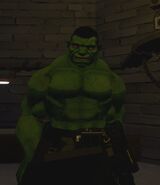 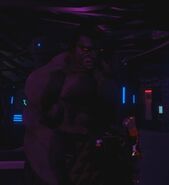 Carl “8” Clerk, Cap'n Angelina Greasepalms, and Charles being offered a job by Rook.

Fighting in the MARS arena in the Upper City 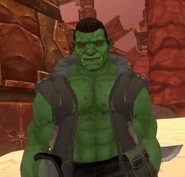 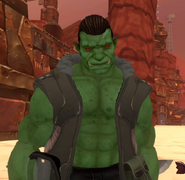 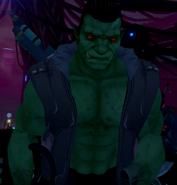