Chandler also known as ChairHandler is an actor,[1] roleplayer, DJ and streamer on Twitch.

Aside from his IRL acting career he also is known to portray the GTA5 character Carl Crimes,[2] a parody of Carl Grimes, his character from The Walking Dead TV-series.[3] This together with Cyr who portrayed the duo complementing character Rick Rhymes[4], contrary to his counterpart Rick Grimes.[5]

This article focuses on Chandlers time in VRChat.

ChairHandler first visited VRChat on July 31st 2020 being invited by Cyr to visit and stop by Roflgators bar The Golden Gator 2020 where he was introduced to the regulars. He met the seductress succubus Blu Haze[6] and was treated with the common initiation to newcomers at the bar when he met Java who hit on him until revealing "her" secret.[7]

On Aug 26th he joined the roleplaying lobby at the Golden Gator again and had quite an experience. He got a bunch of alien diseases from Flynn, got infected by Corona from Walter H, alcohol poisoning and threw up when he was beaten up by over 10 people. Just another average night at the bar!

He attended The Crab Gang and The Bike Lobby's Hells Kitchen RP on Aug 27th 2020. The secret ingredient in the special sauce was a common topic of interest.[8]

He teamed up with NotoriousNorman the investor as his business partner, trying to establish themselves in Bricktown but having issues with the criminality. Some still speculate that Norman is a posing bum or scam artist so what Chandler actually got himself into remains to be discovered.

On Nov 6th he hosted a launch party for the hangout map Casa de los Cielos he commissioned to be created together with Yewnyx and other friends in VRChat. 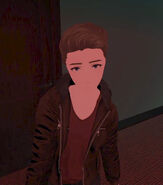 Chandler streaming both his IRL camera and in-game VRChat view while DJ:ing