White
Carl Clerk, most well known as 8 is a convenience store owner in Callous Row. His store has most general use goods and he knows how to get drugs that wouldn’t normally be sold in his store. He lives a low class lifestyle barely making it by with his store that he doesn’t even fully own after being tricked by WOTO. He hopes to one day fully own his business and take revenge against WOTO. He is portrayed by WiFiPunk.

Carl started working at his family's convenience store as a boy and never stopped. While other kids were off working hard at their family businesses Carl was goofing off and ignoring his duties. While working a shift with his uncle on his 18th birthday his uncle slipped on a wet floor and later died. His parents taking over the uncles percentage of ownership they quickly became targets of the WOTO mega corporation. WOTO representatives then deceitfully convinced the parents to sign over 51% of the store ownership to WOTO. Leaving the family to operate the store without any input on the products sold. After fighting back against the mega corporation they mysteriously disappeared. Leaving only Carl to manage the store with his remaining 49% percent ownership.

As 8 re-entered the city his mind wandered. He should have been thinking about the current stock of his convenience store, particularly regarding what had expired and what hadn't, but 8 was unable to think about anything besides his family whom had gone missing shortly before the quarantine leaving him their share of the shop. He was grouchy. Not interested in returning to work at the slightest, but his savings were low, and if he was to avoid ending up homeless or find out what happened to his parents he would need to keep the shop running as profitably as possible.

After opening the shop a few interesting new faces he hadn't recognized before came in, as well as some familiar, but nobody he'd known all that closely before being forced out of the city. After a few successful sales 8 decided to see what else was going on. It'd been a somewhat slow, but steady shift. He overconfidently roamed the back alleys, falling down a shaft to the undercity into a pile of garbage. He didn't recall that being there in the past. He hurt his back, forced to work his way back to the surface in a different way from which he came. By the time he reached the surface it was time to reopen the store. More new faces. Including a few doctors who instructed him to stop by the clinic regarding his injury from earlier. When he arrived there he was instructed to return later as the primary care provider, Dr. Universe was still away.

Turned away from medical attention 8 decided to temporarily address the wounds with a drink, heading to the bar. Once there, he got into an altercation that escalated to a fight with a small furry person by the name of Cap’n Angelina Greasepalms. The two however were both too stubborn and in need of credits to turn back once they arrived at the arena. While 8 fought valiantly he was unmatched against the small furry creature's weapon as he was unarmed. Ultimately due to his previous injury and taking on too much blood loss 8 did not win. He retreated from the arena vowing he would never not win again.

After the fight he was rushed to the clinic where his wounds were addressed with care including his previous injury. However, the doctor refused to give him more than a single days dose of medication, and once it wore off left 8 feeling mildly unpleasant. A kind solo practice doctor then offered 8 a fantastic deal. Two bottles of medication at 1/4th the cost of the clinic. Unfortunately the medication had some unexpected results. Fortunately nobody of significance besides the great doctor saw him in this state, and the effects soon wore off. His memory of the days events however hadn't. He had a new goal. If he was to survive another fight he would need to acquire some form of protection.

After a near fatal injury Carl was left in a medical pod unit kept in suspended animation in The Row hospital. His store was afterwards taken over by a WOTO synth going by the designation "Zero", also portrayed by WiFi. Zero would later seemingly self destruct after malfunctioning. 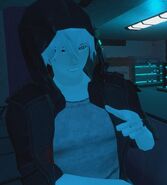 8 in his convenience store.

8 vs Cap'n Greasepalms in the arena.

8 flees from the arena.

Recruited by Rook to go on a mission together with Angelina and Rask. 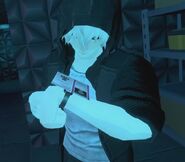 Showing his ID to Rook

In The Shattered Legion base following his participation in the robbery of a Mars corporate patrol.
Add a photo to this gallery
Retrieved from "https://vrchat-legends.fandom.com/wiki/Carl_“8”_Clerk?oldid=85956"
Community content is available under CC-BY-SA unless otherwise noted.