Male
Capernicus "Cap" Fawkes is an emergency medic and clinic assistant working under Dr. Cellulose together with Dash Spacer at the clinic in Callous Row.

He is crippled both figuratively by debt, living a poor lifestyle, as well as literally by heart problems and a missing leg from an old war wound. To make up for his handicap he uses a poorly fitted augmented leg of bad quality which tends to act up and malfunction.

Capernicus Fawkes was born wanting to feel useful. A sickly child he sought out a purpose and found it-- medicine. He grew up training to get into medical school, but he unfortunately was drafted midway into his classes. However, in the field he learned more techniques and became pretty skilled at his profession. He was sent home after sustaining a serious injury that cost him his left leg and he settled down, finished school, and started a family. That's when life went downhill.

He was horrified to find his only daughter suffered the same condition as him, only it was harder on her body than his. Despite getting the best medical treatment he could for her, it wasn't enough to save her. His wife couldn't handle the loss and left him, even saddling him with the bills. With this large debt he couldn't afford his family home on his own anymore, so he sold it to find a more affordable accommodation and settled in a small apartment in Callous Row.

Seeing all the people that needed medical attention and the shortage of staff in the clinic, he decided to take a job there.

During the course of the years following Cap’s wealth increased, but his health steadily declined. Eventually after the course of the zombie outbreak and downfall of the necromancer his heart finally gave out, leaving him nearly dead. He’s only recently recovered from this, waking up in the medical bay with a new piece of machinery keeping him alive. 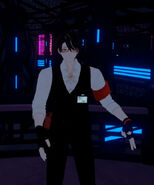 Treating Desmond with Ciara and Celeste 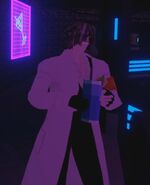 Cap and Dr Cell
Add a photo to this gallery
Retrieved from "https://vrchat-legends.fandom.com/wiki/Capernicus_Fawkes?oldid=97059"
Community content is available under CC-BY-SA unless otherwise noted.