Employed as a Street Samurai and Shadowrunner by Rook

Self-employed as a Synth Engineer and small-time Decker.

"One day I'll get out of the slums and my name will be legendary. Will it be revered or feared? WHO CARES?! IM GONNA BE A SPACE PIRATE AND THAT'S ALL THERE IS TO IT!" ― Angelina's inner fiery glow

Cap'n Angelina Greasepalms once thought of herself as being a glorious Space Pirate but in truth found herself living in poverty in the slums of Savior City named Callous Row, far from her dream of captaining a crew of her own scallywags sailing deep space.

Coming from a family of actual space pirates she was rejected by her father and wishes nothing more than to prove herself to him. To show she's got the chops to keep up.

Stoic and prideful in nature regardless of her small stature there is some actual bite to her barks. Being proficient in fencing she is ready to pull her sword on anyone and anything insulting her pride or threatening her friends. Even if it's a fight she knows she can't win.

Angelina has been on her own for quite sometime. Her mother passed away when she was only ten years old after succumbing to a horrible disease that wreaked havoc on the planet they lived on with her father, famed space pirate William Vossler. Her father never stayed around for very long and when he did his time was spent spewing drunken vitriol at Angie and her mother. Angie's mother Renata was truthfully just another "good time" for her father, he'd taken a liking to her for her appearance. Angie took on a few traits from her mother, in the form of a wolf's ears and tail. After her mother would pass, this was Vossler's opportunity to leave, and leave he did. Leaving behind just another of his long list of illegitimate children.

As her mother's condition began to worsen, desperately afraid of being alone Angie tried everything she could to make her father stay. She begged him to be a part of his crew, not caring how dangerous or demanding the job would be. But how could she convince the man that the trash perceived before him is worth anything? He was too busy, too wrapped up in himself to see the glimmer in her eye- that of wanting to prove herself to him, and make something of herself. He would leave after Renata's death and that glimmer in Angie's eye would fade for a time.

Fixing and befriending a discarded Nirvana service bot from her childhood that she name "R1C4RD0" would thankfully rekindle her fiery motivation once more. She found herself chasing an opportunity that would launch her into famed Space Pirate stardom but lost "R1C4RD0" in the process. As the opportunity slipped further from her grasp, she found her way scrounging for survival in the slums of Savior City.

Living in the worst kind of poverty her innate taste for fresh meat made her prey on rodents in the slums and she contracted an illness after satisfying her strange hunger and being unable to afford proper nutrition. Being unaware of her illness she suffered symptoms of coughing, wheezing, low stamina and even fainting when she exerted herself.

She fought in the fighting pits run by Argen Sterling against Carl “8” Clerk but would later come to accept him, as they worked together. Until they fought a re-match with Angie fighting for Charles' honor against Carl after he spewed some hateful words towards her friend. The re-match ended with Carl beating down Angie and attempting to murder her by chopping off her head on the arena floor for all to see.

She eventually found herself recruited by a local freedom fighter named Rook claiming to want to battle the mega-corporations that rule the world, by proxy she became a member of his rebel organization - "The Shattered Legion".

In a revenge attack launched by an armed corporate squad she was gravely injured. She barely survived and lost an arm and a leg. Her missing appendages were later replaced with help from Duncyn.

During the Undercity subway explosion Angie found herself trapped among the rubble and unable to escape. Injured and stuck underground with the mushroom fungus spreading throughout, the fungus attached itself to Angie's mechanical arm and began growing in a most horrific manner.

Angie has now spent a year under Ciara's wing. One of her only surviving friends left in Savior City. Joining the Dark Sisters she hopes to re-pay the kindness and care that Ciara has shown to her in their time together. Losing Alana and Malice has now invoked a vengeful spirit within Angie that she hopes will empower her to do what needs to be done when the time comes.

Fighting in the battle arena vs Carl “8” Clerk

With Charles Rask at The Grindstone bar.

Recruited by Rook along with Carl “8” Clerk and Charles Rask 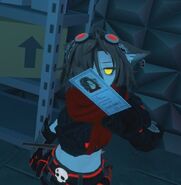 Sword drawn, next to Jack Montagne

Changing the locks on a package with Jack, stolen from a Mars-corporation patrol.

Pulling her sword on Celeste a robot newcomer

Onlookers gather, Alfons and Jack among them

On edge in front of Kei Noriaki, a man known to work for the mega-corporation Talaris.

At The Grindstone bar in The Row speaking to Rook

Retrieved from "https://vrchat-legends.fandom.com/wiki/Cap%27n_Angelina_Greasepalms?oldid=105870"
Community content is available under CC-BY-SA unless otherwise noted.