Cade Shilbrouk is the child of Gradian scholars.  After a childhood of reading about the world, Cade left home to see wonders and find adventures to write about in his own book. Eventually his path lead him to Castle Leydford, where he works as a courier.

Cade was born in Gradia.

His parents, minor nobles and scholars, taught him to read and write and raised him in a life of comfort.  From reading the books in his father’s library Cade learned about wondrous things and far off places, and gained a desire to see such things for himself.  His parents disapproved of his ambitions, deeming them unworthy.  Eventually growing tired of having everything either given to him or taken from him by his parents, Cade left home and traveled east to satisfy his wanderlust, and to escape his gilded cage.

For a time Cade lived his dream.  He found adventure, wealth, friends, and even love in a girl named Anastasia.  During their travels together, crossing a bridge near the Badaria Forest, the pair were attacked by a monstrous troll.  After watching Anatasia and their horse get devoured by the troll Cade only escaped by running for his life into the forest and losing the troll in the thick foliage.  In a single moment Cade lost everything.

In time he settled in Leydford, where he worked as a courier.

After completing an exceptionally profitable delivery Cade returns to Leydford to find that a merchant is selling his drow slave. Acting on impulse Cade buys her for 40 silver. Shorty after Cade attempts to set the slave, named Seravith, free but she refuses by stating that she’d be killed because of her reputation and status if seen unchained. Cade reluctantly takes on the title of slave owner, and keeps Seravith as a travel companion and helper.

Cade’s life becomes hectic as he spends much of his time dealing with complaints about Seravith. While many of these are caused simply by the prejudices of the townspeople, the strong-willed drow also has a knack for stirring up trouble. Despite this Cade and Seravith become fast friends. Cade’s dogged, sometimes ferocious, defense of his “property” and his unwillingness to treat Seravith as a slave lead many to comment on just who is the master in their relationship.

After Cade experiences a number of dangerous situations (including a pair of near disastrous delivers to Dunstead Keep and the first exploration of the mines beneath Leydford), he seeks to improve his swordsmanship. He finds a teacher in Terric Gambol and the two strike a deal: Terric helps Cade with his swordplay, and in return Cade will teach Terric how to read. The two become friends, and Cade even plays a part in helping Terric evade the inquisitor hunting him.

Cade’s affection for Seravith becomes stronger as the pair face the threats looming over Leydford. Several times Cade flungs himself into danger to protect Seravith. When he is stricken with nyctophobia, Seravith comforts him through a panic attack and her presence becomes a way for Cade to steel himself against the fear. While talking to Terric about the other man’s own relationship with Katrina Cade admits to Terric, and to himself, that he loves Seravith.

That love is put to the test during a mission in the town of Gillamore. While exploring ruins underneath the town, Seravith is injured and unable to walk. Cade carries her the rest of the way, prioritizing her safety above all else. As the party flees a large group of undead knights, Cade puts Seravith down to try to help open a gateway. Once the gate is opened Cade is forced through and is unable to pick up Seravith. He desperately fights the rest of the party to go back for her, but he is dragged kicking and screaming back to the entrance of the mine. Once the rest of the group leaves with the wounded, Cade and Tang turn back to try to find Seravith. Amazingly they find Seravith walking out under her own power, but Cade’s relief turns to confusion as the drow stabs him in the side. Morose and wounded, Cade avoids Seravith upon their return to Leydford until she corners him in their cabin. During the ensuing argument Cade confesses his love to her, and a remorseful Seravith explains that it was her anger at seemingly being abandoned and the influence of her haunted locket that caused her to stab him. The two reconcile and try to continue as if nothing had happened.

The stakes grow ever higher as an invasion by the Theozzian Empire looms. Terric is captured by an Imperial inquisitor and is presumed dead. Cade goes with a party to the Badaria forest lead by Myrindal Thesalor in a search for arcane knowledge to use against the Empire, then is dispatched on a scouting mission with Arn and Kat to the border town of Dawnmire where they discover the town taken by Imperials, set fire to an Imperial camp, and rescue Terric who is surprisingly still alive. Shortly after the Leydford militia joins the main Arilaandi army in a failed attempt to stem the Imperial invasion, and the survivors return to Leydford and brace for a siege. Exhausted after days of battle and both having survived near death at the hands of an Imperial inquisitor, Cade and Seravith become lovers.

Imperial forces lay siege to Leydford. After a day of hard fighting, Cade joins a desperate mission into the mines to see if there is an arcane archway in them. After fighting the mushroom men who infest the mine the archway is discovered but at high cost: Terric, who is now like a brother to Cade, is killed. Upon returning to the surface, Cade endures another day of combat. After nightfall ends the fighting Cade looks for Seravith, and sees her fleeing the keep. He tracks her to the entrance of the mines where she is hiding in the darkness, visibly terrified. When asked what happened she doesn’t explain, and instead orders him to leave and to find somewhere safe to sleep.

The final battle for Leydford unfolds the next morning. Despite a valiant effort the outer walls of Castle Leydford are overrun. Cade is shot in the chest by a “knightkiller” weapon, but survives and escapes with the others into the mines. Despite his injury he fights with the vanguard to clear the way for the Leydford survivors until they find refugee in a keep among the subterranean ruins.

Inside the keep Cade has a conversation with Myrindal, and the scribe cryptically warns Cade to not let Seravith ruin him with what she may have to do. Cade is further troubled when he is taken into confidence by Arnulf 'Arn' Ehrhardt, who reveals that Captain William Rallart has warned him about Advisor Fallgrith's plan. The Advisor will take only a chosen few, among them Seravith, through the portal and leave the rest of survivors to die. Cade doesn’t want to believe it, but he can’t help but notice that whenever he interacts with Seravith that day it seems hard for her to even look at him.

The Leydford survivors fight their way through both Imperial soldiers and mushroom men to reach the stronghold that holds the archway. Cade’s worse fear comes true as Seravith joins Myrindal, Advisor Fallgrith, and Lord Gavus as the guards prevent anyone else from approaching the activated archway. Despite his anguished cries Seravith enters the archway, leaving him and the rest of the Leydford survivors to die.

Cade joins the other fighters in a last stand, buying time for Iyendil to open the archway and allowing the survivors of Leydford to escape. Once he is convinced that they are safe, Cade seeks isolation. After days of nonstop fighting, the death of Terric, and being abandoned by Seravith, Cade breaks down in grief. He is comforted by his surviving friends, notably by Arn and Haskaal who welcome Cade into their brotherhood. Cade agrees to train as Haskaal's understudy, both sides stopping short of swearing any binding oaths.

Cade opens his book, the ongoing story of everything he has experienced. Turning to a page where he drew a sketch of Seravith’s eyes he moves to tear it out, but is unable to bring himself to do it. Putting the book away he rejoins the rest of the survivors of Leydford. At long last they get a night of rest. 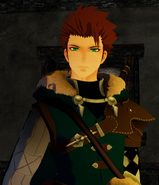 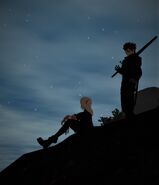