"Five-year warranty to your home repair. I used to be three energy-saving stars but I dumped one into that chick over there" ― Buza, when answering what his specs are

"I'm checking out for the night. I can't deal with this Naruto convention" ― Buza, when avoiding weebs attempting to speak Japanese

Divorced from an oven

Buza is a roleplayer known for portraying a microwave robot who used to work for Roflgator as a chef in 2018, at the bar located in The Lair of Roflgator and formerly The Great Pug. His specialty being TV dinners. Duh.

He is the main-director of the movie Mushy Apples.

When not working in The Gator Bar he also worked part-time for Drekwiz in Hotel Derk.

Since 2018 his visits to VRChat have become more rare although he recently joined the Callous Row RP led by Arcadum. In this RP he portrays Coach Eric.

He started going out with Emerysaur in April, their relationship status remained a mystery and a hot topic of discussion. When asked about it, Buza claims he enjoys Emery's incessant screaming, nagging and yelling. He once expressed that he doesn't mind her having sexual relations with anyone else as long as the outbursts of rage are saved exclusively for him.

Although giving mixed opinions on Chipz depending on who's asking, he didn't hesitate to join Chipz' Super Scuffed Squad, even backing him up during The Crossover when Chipz met with Joey Bagels.

His past relationships include an unknown oven which left him with shared custody of two annoying children, Laffy and Taffy. He dislikes kids and is not afraid to show it in public.

Buza owned the Winchester Tavern for a short time until the Calzone Mafia under Don Vinchenzo bought the property.

Buza currently sleeps at the Lair of Roflgator. After experimenting for weeks, Buza made his relationship with Shrimp official on June 13th, 2018. He claimed to still have feelings for Emery, but due to her not coming around recently, his feelings for Shrimp had taken over. Shrimp would later dump Buza for NotValco.

Buza would be named Employee of the Month for July 2018 according to a plaque mysteriously put up in the Lair. By August, Buza's relationship with Lexitime had become well known, officially breaking it off with Emery.

On August 6th, he would debut the official movie poster for Mushy Apples. He is the main-director of the movie.

Buza held his first "podcast" called 'Breakfast with Buza' in Roflgator's Discord on June 8th, 2018. It spawned many memes and copy pastas, most of which would be considered too vulgar/mature to even describe on this wiki. He would hold his third podcast on June 22nd, sending out pictures of breakfast in the Discord as a signal.

Due to the wild success of the crude podcast and the juicy VRChat-related topics that were discussed, it had become a weekly experience, with the podcast airing in Roflgator's Discord every Friday sometime around 2:30pm CST. It is not (officially) recorded or archived, so it is a "you had to be there" kind of experience.

Due to unknown reasons, he would suddenly stop hosting the podcast in the middle of July.

Notable guests on the podcast included:

There has already been a number of "spin-off" versions of the podcast where discord users in Roflgator's community get together in voice chat to discuss pertinent topics of the day, with or without Buza.

A young man of few words that sometimes comes off as abrasive towards strangers. He's uncomfortable to show his face and wears a mask.

He's a "flame ninpo" mixed martial artist with a keen understanding of new gifts and incorporates them into his fighting. He keeps a ceremonial spear on his back which is a family heirloom.

Wang Tao is an alternate character when participating in Arcadum's Forbidden Knowledge RP.

Buzas block-person persona. They prefer to be referred to as "Cubic Americans".

Coach Eric works as a banker and civil servant in Callous Row, the shady slums that lie in the shadow of the futuristic metropolis known as Savior city. He recently got appointed the position of Mayor. 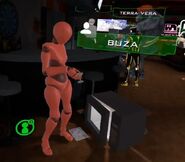 Buza picking up a Robo chick 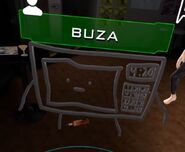 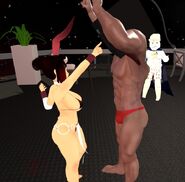 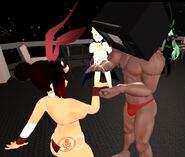 Buza working at the Gator Bar 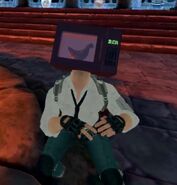 Buza with food on his mind

It's an actual chicken

Buza and Wimchimp embrace after the premiere of Mushy Apples. 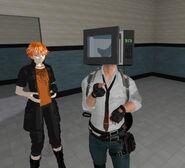 S0ra and Buza in the Bricktown Hospital. 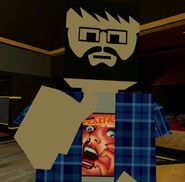 Cubic-American Buza with a "Breakfast with Buza" t-shirt 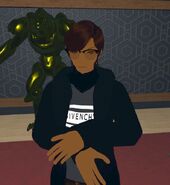 Fighting with Bee
Community content is available under CC-BY-SA unless otherwise noted.
Advertisement