Male
Bub is a heavily modified version of a standard-issue TraVerse delivery drone. He currently works as a fisherman in The Undercity, helping to supply fish to anyone who needs it, while working out the fishing hut in the Water District.[1]

His creator was a TraVerse employee who used Bub for corporate espionage within the company to help him gain and edge over his co-workers. He was eventually caught and 'dealt with' by TraVerse, and his possessions, including Bub, were trashed. Bub was later fished out of the Undercity lake by Barnaby, the original fisherman, who helped repair him and gave him work as his assistant. Barnaby has recently gone missing after going to the Upper City to deal with some personal matters. 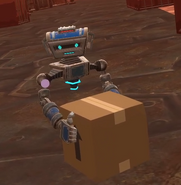