"The town that helps you reach your dreams or burns them down to the ground" ― Roflgator, remarking on Bricktown

Events are categorized under:

Downtown Bricktown is a place known for it's rivaling gangs and criminal activity, located somewhere in a fictional New York state, USA. It's the main location where the Gator RP Group gather near daily to roleplay and it houses the bar that is home to Roflgator namely The Golden Gator.

The map is built and maintained by Roflgator. It is used as a location for his friends and acquaintances to do improvised roleplay. It has gone through many revisions in it's time and is ever changing. The most recent versions are not usually public.

Bricktown RP was previously canceled indefinitely on July 2nd 2019 following Roflgator Season 6.[1] It was revived again in 2020 as The Golden Gator 2020.

Good is a bit of a relative term, but to Roflgator he can be considered so. The Bandit is a mysterious masked person who hasn't revealed his name. He works a bit like a 'fixer' solving problems for Roflgator in exchange for money.

'Fistman' or 'The Fister' is the resident super hero attempting to keep the streets of Bricktown safe. He has his work cut out for him and often stumbles in performing his job.

You're friendly neighbor spider-man in all his glory. Sometimes he assists the local constabulary CDMan but most often he's spotted slacking at the bar - or engaging in the dating game.

The Robots of Bricktown are known for their absent minded shenanigans when attempting to emulate human behavior. Roflgator has occasionally described them as acting especially weird when grouped together and tried to separate them.

Most known Robots of Bricktown

They once malfunctioned so badly that they started to become violent.

The Mayoral position in Bricktown has gone through many incument in the recent year.

The first to hold the position of Mayor when The Golden Gator opened in Bricktown used to be the charismatic cyborg crocodile Crocolol. Whenever he's visited the bar he's attempted to exploit Roflgator to perform services to him. He was eventually burned by Roflgators laser, disappeared in the sewers and was presumed dead. He later reappeared wanting revenge and attempted to murder the next mayor Zapdec.

On Oct 7th, 2018 a new police department opened and replaced The Withering Skull bar. The city council did some extremely aggressive recruitment and seemed to employ people who were in the near vicinity of the area when the place opened.

When the station opened it even recruited members of nearby The Bricktown Block gang.

The Illuminati is a secret organization of power in Bricktown. They have public representatives going by codenames as berry. Their public speaker is a violent and cruel character named Cranberry.

The Bricktown blocks are a notorious gang mainly consisting of square or cubed people. Their common trait is that they consist of a low amount of polygons. Referring to them as "Block People" is considered a racial slur and a severe insult. A more respectful title is "Cubic American".

Being a gang they often harass the regulars of The Golden Gator by playing loud music, usually from the Minecraft soundtrack or disturb the peace in various ways.

They run what they call a 'hospital' consisting of an old bed dressing located in an alleyway.

The Bricktown Blocks gang mostly dispersed when their leader Zapdec became the Mayor of Bricktown.

Some members of the Bricktown Blocks are:

There is a monster of some sort living in the sewers which can be reached through manholes in the streets outside The Golden Gator. The monster stole Rob and Ikumibots cat Gidget on Sept 15th, 2018. In Ikumis absence the cat was adopted by Kenzokuk.

There have been monsters roaming the streets resembling The Predator and Alien from the movies sharing the same names.

Rob tried to spread rumors of another monster called Triangle Head on Sept 24th but nobody took him seriously. He wanted to prepare an alarm system and a monster in order to quickly clear the streets outside the bar from loiterers. He asked Arcadum for aid in summoning such a monster.

"Afish" a half-shark, half-man looking creature from "Aswamp". This creature stalked the streets of Bricktown on Nov 9th 2018 hungry for flesh. In it's rampage it bit of some of the populace various body-parts.

The Hotel is run by a shady bunch who wears masks.

The water in Bricktown is contaminated and brown from an unknown source. Roflgator even claims it to be radioactive. The Sewers were cleaned and improved by a Cleaner Bot on October 1st.

Since the sewers were cleaned a crocodile gang related to Crocolol started appearing regularly in November 2018.

On Jan 20th, 2019 a new store opened in Bricktown catering to the types of people Roflgator is not interested to have in his bar. The competition is located just across the street from the bar and Rob considers them the antithesis of his own establishment.

The Bricktown Hospital was opened on Nov 2nd, 2018 by the succeeding Mayor Zapdec. He appointed Hydrand as the manager of then new establishment.

Kyana revealed that the Hospital is corrupt on Nov 5th - They intentionally send out villains - sometimes called 'Shadow people' - to hurt people to later exploit them with inflated hospital fees or denying them treatment unless they agree to perform 'favors' for them.

Roflgator and Foreigner managed to capture a "Shadow Person" and tortured it into revealing the ploy that it was working for Hydrand.

'The Withering Skull' was a competing bar owned by Astree and Hydrand. They were the main competitors to Roflgator and his Golden Gator Bar.

The Bar ran a very aggressive recruitment scheme finding new dancers and employees after they choose to resign or... disappear. Being very active it's owners are constantly looking to hire new dancers and entertainers.

The Withering Skull features a suspended cage for dancing and a larger cage next to the entrance lounge area for pit fights.

The Withering Skull shut down suddenly on Oct 7th due to failing sales to be replaced by the Bricktown Police Department.

Past Members and employees

Rob explained that the plot where the bar was built was acquired cheaply due to it being located on an a Native American burial ground. There are talks of a curse that is associated with the location. The legend of the curse says that every year one person dies and turns into an unknown creature. The curse may be related to the monster in the Sewers but this is unconfirmed.

History and events of note

The water in the Bathhouse turned brown with Rob blaming it on radioactive contamination. On Sept 18th Briteone crawled in seemingly dying of thirst and felt better after drinking it. The true nature of the contamination remains unknown.

Outside visitors of old

On Sept 24th 2018 Dyrus, after a long absence from VRChat met Roflgator in a public lobby and was offered a guided tour of the bar and the surrounding areas of Bricktown.

On Sept 26th, 2018 following the passing of one of the members of the Block community Roflgator made a temporary exception to his rules allowing them to hold a funeral in the bar. He allowed everyone into the bar including "Mutes", "Lolis", "Blocks" and "Furries". During the opening Dyrus and Surefour visited dressed as birds.

Roflgator recruited a knuckles named Blu3z to replace R3dz to be his assistant and supply him with words of wisdom.

The Mayor of Bricktown "Crocolol" visited The Golden Gator on Sept 30th confronting Roflgator and questioning him about running a brothel, as prostitution is illegal in Bricktown. When he brought up his accusations Emerysaur deflected the conversation and brought up the severe health issue about the contaminated drinking water being radioactive. Rob denied the accusations towards him and sent his bunny girls see to the Mayors needs, keeping him distracted, Gashina offered him a 'back massage'.

On Oct 1st, 2018 Mayor Crocolol and his bodyguards returned to cause a mess roughening up the place. In order to get him to leave Rob offered him Kyana to work part-time for him and agreed to have his Cleaner Bot clean out the sewers.

Crocolol later looses his position as mayor and is replaced by Zapdec in a plot where Roflgator seemingly murders him - the leading politic shifts. Thought to be dead the former Mayor eventually returns and enacts his revenge. In The chaos Mute Max gets murdered by Lockdown.

Mute Max entered Bricktown as an aspiring-to-be bartender but got deeply involved into the criminal ongoings of Bricktown and was tragically and ultimately - consumed by it. He was later revived from the dead by Dr Wily and diagnosed by Arcadum.

Links to various videos and clips

The Bandit is spotted spying from a second story escape stairway 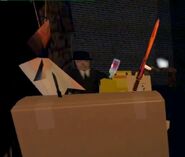 The Bandit idling outside a shoddy alleyway bakery run by Kenzokuk

The Bricktown Blocks and Judd

Zazin considering running for Mayor of Bricktown and conversing with S0ra

Stone-E-Rock injured after a pit fight

Staff at the ready 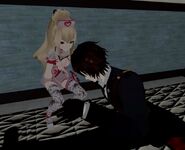 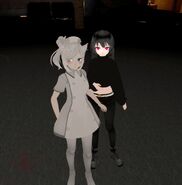 The entrance to The Withering skull from downtown Bricktown

The Withering Skull viewed from atop the cage 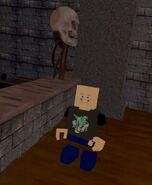 Lounge area with a television 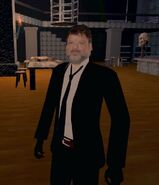 The Bandit helping himself to some drinks behind the counter

Old Bricktown prior to changes made.