Bobken Zavakian is a human that was born in the Upper City under quite shady means. This almost caused him to be sent to the lower districts of living with a family who was not well off. Due to the high stakes of being outcased from higher society Bobken had a constant fear of failure. Fortunately he found himself becoming quite the academic mind after a mentor decided to take him under her tutelage. Although she was not of this world he became a professor due to his advances and rigorous studies.

This marked the beginning of his successful career. He went on to network with the science community and publish research. He innovated in the areas of statistics and data analysis. Word about him traveled throughout the city. He was then approached by business members of the higher corporations for possible job opportunities due to his success as a professor.

Bobken Zavakian now works for Sonitii as a logistics manager and data analyst. He is referred to as "Mr. B" by his coworkers. He organizes shipping routes between corps while managing the massive data required for some of Sonitii's operations. He also researches new transportation tech for the corp. He’s been climbing the corporate ranks ever since. He doesn’t enjoy it nearly as much as teaching, but the job has its benefits.

However, due to his position, he has gotten extremely wary of those who may threaten his peaceful life. People who possess cybernetic enhancements are always suspicious and he treads very carefully amongst them. Anyone who is technically adept, he sees as a potential security threat. Anything that can get in the way of his data security is dealt with cautiously.

His goals are simple: Keep working hard and live comfortably. As he was once a professor, he aims to pass down his research to curious learners within the corp. He strives to create a world where people can have their needs delivered to them in seconds. He also refuses to believe in magic.

"Welcome to Speedy Sonitii! We move things from point A to point B!"

"Onward to the infinity of Presidency!"

"Sonitii - We drive your work!"

"All Hands on Deck!"

"Welcome to the Book Club!" 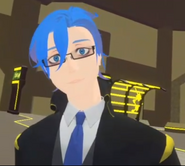 Bobken working hard at the desk.

Bobken wearing mask and taking off glasses to avoid synthetics. 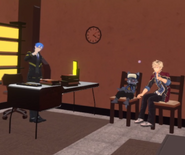 A meeting with Dagu.

Close up of Bobken and Dagu. 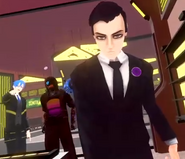 Bobken at a meeting with Mars.

Bobken at a meeting with Atlantis. 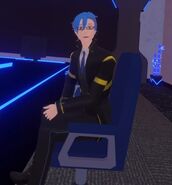 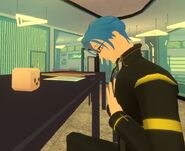 Bobken being harassed by Vee.
Add a photo to this gallery 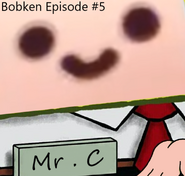 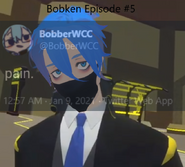 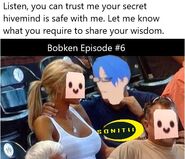 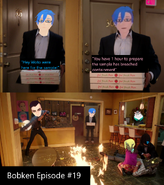 Bobken Episode 25 Meme
Add a photo to this gallery