Bobe_ is a confident woman known for her supposed high-class and brutal honesty. Sometimes teased for acting like a clueless rich girl stereotype, this is an inadequate description.

She's a regular patron at The Royal Gator participating in events, game shows and RP.

Bobe_ was first introduced to The Royal Gator lobbies in VRChat after teasing TheBigMeech on Twitter when she made fun of him for his pink bandanna and claiming him to be denying that he's gay. Afterwards he reportedly had told her to PM MurderCrumpet for an invite to the lobbies and joined up with them on April 6th. Their friendship cemented after they met up and talked, and would continue to grow from there. Meech would eventually explain his monetary deal with Sodapoppin, to marry and divorce MurderCrumpet for money, after which she roasted his reasoning for just being poor.

Started out in desktop but quickly acquired VR gear, and would end up getting full-body tracking a couple months later, debuting it on May 30th 2020.

On May 1st she participated in elimination RP portraying an old lady in old folks retirement home RP.

She participated in a swimsuit competition on May 12th but didn't make it to the finals.

On May 13th she acted judge for Mr Royal Gator May along with Jadez, LustHarmony, MurderCrumpet and DustBunny.

In a bet with Sodapoppin on May 16th she battled Roflgator in a game of beer pong where the loser had to cover a part of themselves in ketchup or barbecue sauce and take a picture. She lost and did so.

She was chosen to be the Vice-President for Crumpet in his Bricktown Election 2020 presidential run.

In an improv theater show later nicknamed The Kidnapped Princess on June 23rd she portrayed the princess.[1] 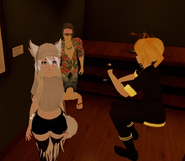 Bobe with Meech and SciFri

Acting judge during a beach competition 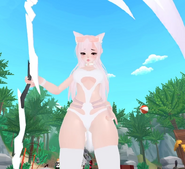 Doing a "cheerleader thing" with MurderCrumpet 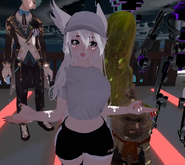 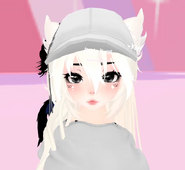 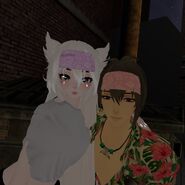 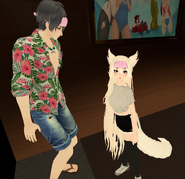 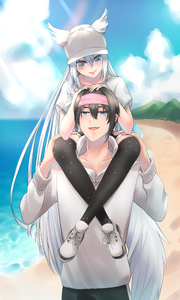 Artwork of Meech and Bobe by Zernovia