Blayne Penn was a poor boy from the Wasteland who lost his parents before he was even able to know their names. On one fateful day, he was found and taken in by a wealthy family named the Copperfields who raised him as their own. Over a few years Blayne grew close to the family, especially their only son, Teller.

When the boys were around 10 years old, the family had a run-in with a mysterious businessman named "Mr V". He ended up killing Teller and leaving Blayne physically and mentally scarred. This sent Blayne into an obsession over a childhood fantasy of sabotage and information gathering.

Eventually being scouted and picked up by TraVerse, Blayne works hard for the corp. It however is all an act to him, as what he truly wants is revenge, so he has no loyalty to anyone or anything. He trusts few after the loss of his brother, but secretly he desires to feel companionship again, even if he is afraid of it. 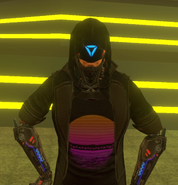 Blayne and his synth friend B.B.