Belisarius (or Lord Qroak as he requires those who know him to refer to him by) is a large alien that resembles reptiles and amphibians on Earth, and is a member of the Mars corporation. He cares only for his species' inclusion into the upper echelons of corporate society, viewing all others around him as tools to further the uplifting of his race into known galactic society.

Once a scavenger who made a living selling the weapons off of dead soldiers during the War of Unification, Qroak rose into the ranks of shady gang dealings after eating the competition. It was in these circles he became known as "The Demon Who Makes Meals of Men." Now, he works for the Mars corporation as their lead contract manager on Corvanis-3, and seeks to increase his political power to fulfill his duties as the king of his clan.

In his first day on Corvanis 3, Lord Qroak proved himself to be a stern Asset Manager for Mars when he disciplined Mars guards that had wandered off from the front gates by shooting one of them, despite Luca's protests. The guard was fine since the shot did not pierce their armor, a deliberate choice by Qroak.

When all of the corporations lined up outside Sonitii after their orbital gun destroyed the Golden Lance, Qroak was unintentionally told to "shut up" by Bobken, to which he pulled a gun on for the perceived disrespect.

Qroak joined Korgak and Luca in the Wasteland to look for scrap to help in building the bomb they were constructing with Talaris. The trio noticed a dreadnought flying towards the bramble canyon and decided to investigate. There they encountered mercenaries armed with Quixote weaponry and were told to vacate the area, and when they refused to do so the unknown mercs opened fire.

Qroak laughed with pleasure at the thrill of combat and was amused by Luca's fear. However, he was hit many times both by the Quixote weapons and the shrapnel put out by the Hellfire missiles shot at the group by the dreadnought. As he made his way back to town on foot with the group, his energy drained and he accepted treatment at the Scrap Town clinic after some initial protests.

Qroak attended the joint operation with Talaris and WOTO raiding Thaddeus's mansion. In a room that looked like a shrine to a corpse, he and Korgak decided to consume some of the corpse's flesh to replenish their strength. Later, during the fight with Thaddeus, Qroak misstepped and slipped off the elevated platform, falling thousands of feet to the Row below. He was revived by the Lazarus Program nanites in his body and fought his way back to the corporate docks and to the Upper City.

When a Mars fighter crashed at Union Tower in the Upper City, Qroak was one of the first people at the scene alongside Luca. He took control of the situation and attended the meeting with the Heads of Security after to debrief. He and Vee directly engaged an Illithari when one invaded the boardroom and took control of the Mars pilot.

Later, he was overcome with pain and collapsed outside his apartment. Luca received an alert that his life sign was fading and rushed to his aid with Razz, Manyu and David. The group quickly brought him to Nirvana, where they discovered necrosis had been spreading inside him. Unfortunately they were too late to save him, and he died in the operating chair. Everyone present noticed his body was changing rapidly, and suddenly he stood up with a roar and attacked, overcome by the necrosis and turned into a massive zombie. Fortunately, close to a dozen armed individuals happened to be present in the clinic, victims of the bombing of the Undercity tavern, and Qroak's zombie was put down almost immediately by the group, including Vee and Luca. What remained after was burned in the Nirvana crematorium.

While never fully explored, Korgak discovered Qroak hated his father, which Korgak used to fuel Qroak's rage against enemies in fights. He also appeared to have a fear of being touched. 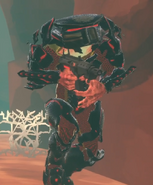 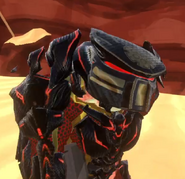 Qroak, detained pilot, Vee and Korgak
Add a photo to this gallery