Atlas (Since being rebuilt)

C3 was built as a prototype greeter robot by an independent builder named Gidi Mann for WOTO. Whilst being made to look fancy, C3 is built with components that would be considered sub par for the corporations. And so it came to pass that C3 was cast down and abandoned in the Wasteland and Gidi vanished, either taken by the corps or in hiding as the rumors say. This left C3 with nothing but their chassis and name.

Contrary to his initial design he currently works as a medical robot for the hospital in Scrap Town.

Getting a new chassis remade for him by Quixote. He now acts as a guardian for those in need whom deserve protection and acts to defend Quixote property and secrets.

Traits of C3-Burns before being rebuilt by the Quixote corporation. These no longer apply. 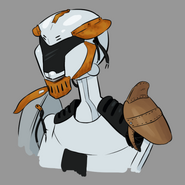 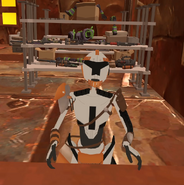 Ordering armaments at the blacksmith

Treating the injured Ash, with Pepper

Treating Ryzy together with Bean

A synth from Nirvana wants to borrow the ambulance

Following BR-16 under the influence of Titan

C3 pulling a gun on Pepper under the influence of Titan 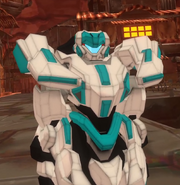