"if a sign of trust is required, then you shall have it." ― Phil, revealing his identity at a Shometsu meeting

Athologoth, more commonly known by the cover-name "Phil", is an alien humanoid stranded on the planet Hellion. Initially found and hired by the mega corporation Shometsu for his latent technological prowess, he eventually fled to the slums of Salvation City after a threat on his life. He sought to continue his research in secret, barely making ends meet while sustaining himself on anything he could find. After the events of season 1, he bought his way back into Shometsu, seeing it as the best way to achieve his new goals.

He goes by the unassuming name "Phil" to try and fit in but doesn't care much for the struggles and feelings of others, unless beneficial. Being apathetic toward most people, he first saw them as "walking biomass in humanoid form" to interact with for his own benefit, although he comes to recognize a handful of individuals for their true worth late into season 1. This results in him not being able to keep lasting relationships aside those rooted in business, with few exceptions.

His initial goal was to "get back home" somehow, but after coming into contact with the extraterrestrial entity "Kazakt Gagarn" his priorities shifted.

Anyone looking through his records will not find much, as he only recently appeared in the Evanaris System through unknown means.

Records show that "Phil" was previously contracted by the mega-corporation Shometsu, working on their R&D (Research and Deveopment) team before he "left" due to some "disagreement". During the events of season 1, he was able to earn a living as a technician/engineer doing odd jobs around the Row, the slums of the metropolis Salvation City.

As of season 2, he has been re-employed at Shometsu

Phil's past of working for the Shometsu Corporation eventually caught up to him. His secret invention "Hard-light" leaked out due to Becky overhearing him working with Talus Nova, his companion. Together they had been working on developing his "Hard-light" technology, a material made up of programmable photons that can be manipulated for everything from data storage to basic weaponry such as shields, swords, and ammunition. Phil, being the only one knowledgeable (at the time) in how to safely handle it and Talus being able to use his own body to recharge it when used in weapons, as the latter's Novakid body consisted of materials from stars.

Phil was suddenly approached by Jack who questioned him about "Hard-light". Learning his secret was out he followed Jack together with Talus and they questioned Jack, he admitted to having gotten the information from Becky. Jack suggested that they should sell their invention but both Phil and Talus refused profusely, insulted. They reasoned that this was not be sold but used by the Row to achieve their own goals. Agreeing to keep it between them Jack was let go.[1]

A strange raspy whisper (portrayed by Arcadum) surrounded Phil, telling him to seek a place of high ground. Wandering aimlessly following directions from the disembodied voice he found an abandoned plaza that overlooks the Row. Introducing itself as "Kazakt Gagarn" it tells him that he needs to bring him a "magical Rune of Earth" from the coven below, "sate it in the blood of a mage", return and offer it to him. In exchange he would give him "a power the two eyes can not see, they who walk below the falcons eyes". Athologoth, gives no response and is left to his thoughts.[2]

Behind Talus Nova and next to Charles Rask as a Mars-corporate droid scans them.

With Talus Nova in Rooks bar.

Searches for the source of the voice. 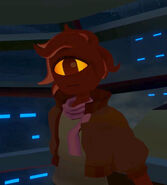 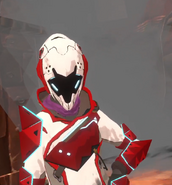 Kraver, Phil and Locket in armor