Astree is an Australian bloke with a bold personality.

Astree started out as the living embodiment of 'Rob' Roflgator's imaginary creation, "Android 11". Because of the strong personality of the real person portraying the character, Astree would impart his own touch into the intended persona, owning the character.

He is skilled in slapstick comedy but initially as a roleplayer he left a lot to be desired. Despite maturing as a diverse and skilled improv roleplayer throughout 2018, he still has a tendency to fire off into fits of rage, brutally breaking RP immersion, and prone to launching brutal insults and mockery if he finds someone to be annoying to him.

Despite his imperfections, thanks to his ability to spread infectious laughter to an audience and his IRL charitable nature, what can be construed as 'toxicity' is often overlooked or forgiven at the end of the day.

History and Lore of the character

When encountering women in-game he usually starts breathing heavily and stares at them creepily. Occasionally, he whips out his scuffed curved sword, flourishing and stroking it he pledges to defend them as his 'queens'.

Astree first met Rob in-game on April 6th, 2018 (We're pretty sure but please correct us if not). IRL (in real life), he used to be a longtime viewer of Roflgator's streams (a so-called "Loyal Boi") until he took it upon himself to wear the meme persona that Rob had created.

He eventually met HeyImBee (Bee) and went on several wild escapades with her, roasting different people in public VRChat lobbies. IRL, he was even featured in her YouTube videos.

Astree's adoptive mother is Cheeeese and he used to live in her basement. To afford drinks at the bar he usually 'borrows' her credit card.

After experimenting for a short time, he got married to HeyImBee at an improvised (shotgun) wedding in the Great Pug on April 16th, to the great lamentation of Chipz, whom displayed outward hostility to their bonding (likely because he wanted her to himself or because he simply thought she deserved better). Roflgator was acting minister.

Astree's job used to include cleaning toilets in the Pug before it burned down. Now whenever he's not together with Bee he hangs out in the Lair of Roflgator, or they hang out together there.

As a part of some convoluted plot by Rob, Astree (among others) joined Vintendo's The Polygon PD (PPD) on June 13th, his first job. His mom Cheese was so impressed, she gave him one week to finally move out. Astree said he'd just camp outside Bee's house until she finally lets him in. Almost a week later, he was still living on the street. Bee would later admit she's a student and doesn't have a house, so Rob offered them both temporary lodging in the dungeon of the lair.

On June 27th, Astree was accidentally killed by his creator Rob while he was using him as a punching bag to let off frustration from the ongoing political campaign. Thankfully, Astree's data was backed up in a cloud and he would return a day or two later. This manslaughter would push Astree into initially supporting Rob's political opponent Jor Rilla and then later his fellow Team 6 member GabouLit.

The origin of the Android 11 persona

On Feb 22nd during a Twitch livestream Roflgator was drawing random DragonBall Z inspired fan art and made up a silly character to match the drawing. There is an actual character named Android 11 that exists in the DragonBall Z universe. The character is only referenced to but never shown on screen.

The initial idea behind Android 11 was that of a an insecure middle aged 'beta' male living in his parents basement setting out to protect female gamers. The character would compensate for his lack of social skills by waging internet flaming wars and creating conflict and drama where there initially was none. From the backseat of his chair he would be weilding the most holy weapon of the internet: The keyboard. As a keyboard warrior, Android 11 would put women on the highest of pedestals referring to them as his 'queens'.

A friend of Rob (who?) made a 3D model avatar out of his 2D drawing and sent it to him who uploaded it to his account. On Mar 13th Rob roleplayed as the persona of Android 11 using the avatar. It was well received but the character was killed by Chipz.

A few days later the avatar was uploaded by Shonzo to the public map Shonzo's World. After this, any player in VRChat was able to use it.

Around February 2019, Astree unofficially took an indefinite hiatus from VRChat RP and RPing in general. As of June 2019, he still occasionally plays VRChat but only to hang out and get into hijinks with friends.

The original Android 11 drawing by Roflgator. Made completely in MSPaint

Bee and Astree together at the Great Pug

Bee and Astree portrait (made by Alienbussy)

Astree and loli Vigor at the Great Pug 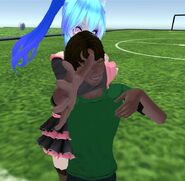 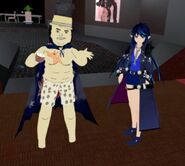 Astree and Mimika hanging out 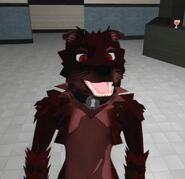 With Shrimp leading Roflgator on a 'furry quest' 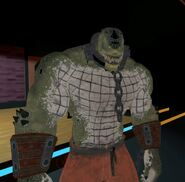 Astree RPing as a 'sewer croc', a cousin of Crocolol
Add a photo to this gallery
Retrieved from "https://vrchat-legends.fandom.com/wiki/Astree?oldid=94101"
Community content is available under CC-BY-SA unless otherwise noted.