Ashley Jones, otherwise known as Ash, is a human that grew up in the Wasteland, spending most of her time fixing up people’s vehicles to make ends meet while her parents started to lose their minds. They would cut small chunks out of her flesh and eat it whenever they could. She eventually made enough money through fixing vehicles to kill them on her birthday with an explosive surprise, an IED in her birthday cake. It was the best birthday present she could ever give herself.

From then on she traveled away from her home on foot and continued to fix things for credits until she had enough to get a bike and leave the camp far behind her. One day she encountered a group of bandits that was trying to shoot down a little green goblin named Ryzy. Ash snatched her up before the bandits could do more harm.

She eventually befriended the goblin and the two joined each other in their adventures, riding on a bike with a scrap sidecar. They now wander the wastes as Scrap Merchants, finding scrap and selling it to people who are willing to buy.

In Episode 5 she was elected as one of three representatives of the town council together with Sean and McCuldger, replacing the former Mayor Rico Suave.

In Episode 6 her arm was amputated after it was shot by a bandit.

In Episode 7 she acquired a new robot arm from Duncyn. 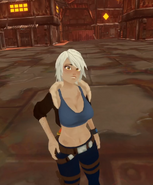 Speaking to Sheilas friendly giant scorpion together with Ryzy

Purchasing a nail gun from Patches

Ash and McCuldger are voted in as co-mayors, replacing Rico

Injured by raiders. C3-Burn treats her

Bean tries to heal her

Pepper tries to soothe her

A gruesome scene as Ash arm could not be saved

Ash and Charles, speaking to Rook

Walking in on the synths turning hostile under the command of the A.I. Titan

Sheila hosts the funeral communing with Pepper and Ash's spirits