"Chipz Season 5 RP", or "Ascension Academy RP" is a roleplaying series run and organized by StealthRG aka Chipz. This article is meant to list and link to members, their characters and participants. For events see separate related articles.

Ascension Academy is a roleplay set in a large fantasy world. The series is largely focused on the titular Ascension Academy, a Magical Officers Academy that teaches it's cadets how to use magic and weaponry, and to utilize military tactics and their own innate abilities in battle. Follow one of over forty characters' perspectives across their tenure at the institute as they come to better understand themselves and their classmates, face off against deadly threats, and protect the world from an ancient evil sealed beneath their very feet- The Darkness.

The participants of the RP livestream and collect their episodes on the website Twitch.

Not all players and characters are part of the same present and past story arc.

Participants who play a role as a student. Students are organized into the squads they were assigned in no particular order.

Participants who play a role as a teacher.

Participants who play a role as neither a student nor a teacher.

Participants who've made appearances but may not consistently appear or be integral to the main story line.

Former players and/or characters who were in the story previously but are no longer portraying an active role in the series.

On Feb 15th, 2019 a teaser trailer was shared via Dropbox by StealthRG on Discord. The teaser covers what appears to be a younger Chipz and 3 other people donning similar matching uniforms as him. The uniforms appear to be of a military, student type nature, or both. As a powerful magical spell is released Chipz together with his fellows take cover behind a magical shield as the spell detonates like a bomb before them.

In Discord on Mar 4th, 2019 a teaser screenshot was shared by StealthRG and Howlcifer confirmed it was him portraying Victor, standing next to Arbor in the picture.

On May 5th, 2019 the Official Chipz Season 5 Trailer was released announcing the release date of Season 5 to be on May 15th 10pm CST.

Ascension Academy as of year 3 has 2 weekly episodes:

Links to Videos and Clips

Participants posing in a teaser screenshot shared on Discord by StealthRG. Arbor and Victor in the front. Rook in the back.

From the teaser trailer. 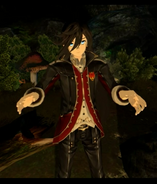