Ariyana is a Twitch streamer Vtuber and roleplayer in VRChat.

Aldric Naust is a pure blood vampire that appeared first in the events of The Culling in Ascension Academy RP.

Avindyl is a High Elf caretaker of the Library of Reclamation in Aldoria in the universe of Ascension Academy RP.

Maia Seren is a private investigator whose office resides in the alleyways of Callous Row near the entrance to "The Grindstone." Maia is Ariyanas character in Callous Row RP.

Iyendil is one of the few, if only, known dryads that exist in Auzera, and perhaps the only dryad that has ever made their home within human civilization. She serves as the alchemist and apothecary of Castle Leydford. She is Ariyana's character for Fractured Thrones RP

Estelle Arkell is a Jr Lieutenant for the Cross-Allied Forces C.R.O.S.S in the Ascension Academy RP. She appeared in the Year Two finale alongside other CAF members.

Ariyana as Elise the half-blood Vampire that appeared in Chipz flashback. 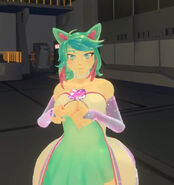 Ariana visiting as an extra for Callous Row RP