Black
Argen Sterling is the ringmaster for the arena in Callous Row. He spends much of his day seeking out contestants to compete in the arena and lives a middle class lifestyle. After escaping from Quixote he trains up fighters as a form of rebellion against the corporations.

He is portrayed by Mini_B.

Argen has kept much of his past a secret. All that is known is that he once fought for Quixote industries during the war and escaped. During his escape he lost a close friend of his and his arm.

He was murdered by Lange Pliskin when Lange invaded Callous Row with Quixote forces, planted and detonated a bomb in the grove of the undercity. 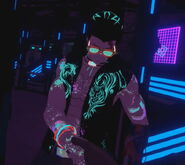 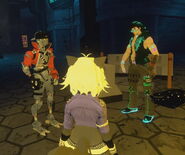 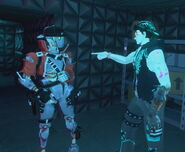 Waving goodbye
Add a photo to this gallery
Retrieved from "https://vrchat-legends.fandom.com/wiki/Argen_Sterling?oldid=73057"
Community content is available under CC-BY-SA unless otherwise noted.