Arbor is a fragment of the singularity given human form as a gem construct. She is the adopted daughter of Azreal and Cell and has an unknown relationship to Chipz's past. She is played by Oblivious.

In the distant past, the two Guardians Azreal and Cell take a walk in the singularity on a date. On the side of the path they are walking they notice a girl with pink, crystalline hair lying there unconscious. Azreal examines the girl and she soon awakens not knowing anything about herself or who she is. Azreal and Cell question her and start to theorize her existence may be a result of the fracturing singularity, a piece of it given life by random chance. Sensing no ill intentions of her, coupled with sympathy, they teach her a few things and help her choose her name. Upon looking at a tree shaped object, she names herself Arbor. Given her new name, Cell and Azreal take her with them to teach the young girl about herself and raise her as their own child.

Arbor is left to her own devices in the singularity for weeks, if not months at a time. With more time passing Cell and Azreal feel it is time to let Arbor see the world and bring her to Earth to explore the world and its people for herself. The first few people she meets aren't very nice and make fun of Arbor. Azreal appears and scares the humans away. They move onto another set of humans, and Arbor is able to meet some new people. Among the new people she meets her first new friend, Katherine.

During one of their visits to the world outside the singularity, Cell, Azreal, and Arbor are spending time in a forest, when Azreal and Cell have to step away to discuss something they must take care of, and in the brief moment they are away, Arbor is discovered by a gem hoarder, a robotic life form that gives itself life by dissolving gemstones into energy. Arbor tries to run from the robot, but is cornered. Azreal and Cell return just in time to save her, as Azreal destroys the gem hoarder. After this, Azreal believes it is time for Arbor to learn how to defend herself knowing how tough the outside world can be. With this in mind he promises to give Arbor a Void sword to use as her weapon. Azreal takes Arbor to a tower in the dessert to spar and train her combat skills. Overall her training goes well with a few hiccups that are corrected by Azreal. A while later, Azreal finally gives her the void sword he promised her on her first birthday.

Time passes, and Arbor heads to Earth to go hangout with her friend, Katherine, under the supervision of Cell and Azreal. They arrive at the place that would later become the Safe Haven and head to a nearby city for some time away. After some talking to the locals, a group of gem hoarders arrive and start capturing people, demanding to know where the large gem they’ve sensed in the area is. Arbor, being scared after the first time she was attacked cowers far away from the robots, and Katherine, jumps into into action herself and tries to talk down the robots, but is soon captured herself. Arbor, fearing what might happen to her friend because of her, goes through the city searching for her friend and taking down the robots in her path. She’s able to make her way to a basketball court where the humans have been surrounded, and dispatches of the remaining invaders. Arbor goes to her friend who is injured and dying, and Cell instructs her on manifesting her abilities to save Katherine. Arbor’s hand glows with a pink light and she is able to repair the wound in her stomach, healing Katherine.

After Arbor saved Katherine her friend started to convince her that her powers and skills could be used to help others. After some time and convincing Arbor is admitted to Ascension Academy along with a plethora of other Ascension Students like Chipz, Esmae, and Rook. She was very timid when meeting many of the other students not really talking to any of them for an extended amount of time aside from Rook who shared similarities to her as an abnormally created construct. She's slowly becoming more comfortable talking to other students wanting to be friends with all of her peers.

In a brief moment we see Arbor out on her own with a group of people in a destroyed city. Among this group is Chipz and Izanami and a few other individuals who have yet to be identified. They quickly get behind a barrier as a scream is heard in the distance followed by an explosion. The group survives the blast and Arbor asks the group if everyone is okay.

During a mission members of Aegis, Team Significant Others discover a crystal buried in the ground absorbing energy from the surrounding area and giving off an emotion of sadness, detected by Mhai. They retrieve this crystal and bring it back to the Stranger’s Cathedral delivering it to their leader Hybris upon inspection they discover the pink spinel has sentience. Hybris hands the crystal over to Crailek to lead in researching the crystal.

Experiments are conducted daily until January 12th, 2019 when Azreal, Cell, Sky, and Belle arrive. The two guardians inform Hybris of the crystal being their long lost daughter who appears now to be shattered into pieces. The guardians take the piece in exchange for giving Hybris a new material called cryosteel as a replacement to research. Azreal lets Hybris know that he would like to be informed if they find any other pieces and will compensate the group for their efforts before the guardians leave.

After several months of a combined effort of Azreal and Aegis searching for Arbor's gem pieces Azreal has finally found enough pieces to reconstruct Arbor. The last piece he needs is being held by a merchant named Zeke. Azreal pulls Zeke through a portal into a forest to meet him along with Belle, while Space Cat watches from afar. Azreal agrees to trade the merchant a cursed sword that if the curse is broken could wield impressive capabilities for the pink gem. Making the trade Azreal and Belle return to a church dedicated to the Void's worship where Azreal has been storing the pieces of Arbor. They reconstruct Arbor with what pieces they have reforming her without her left arm and her memories forgotten. Azreal and Belle try to help fill her in on who she is. Azreal then takes her to an island and then a city that he once took her too in order to jog Arbor's memories but are unsuccessful. In order to protect his daughter Azreal decides to have Arbor and Belle stay on an island together until he can find her missing pieces or she regains her memories.

Arbor is very timid and curious about the world. She shows cowardice when first facing the gem hoarding robots but is able to show courage when her friends life is threatened. She is very caring having love for both her adopted parents and caring about her friend.

Arbor has no blood family being a living piece of the singularity. She has become the adopted child of Cell and Azreal. With her adoption she has 3 adopted siblings being Sky, Belle, and Bubbles. 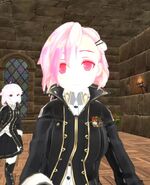 Esmae and past Arbor.

Past Arbor and Rook. 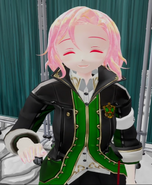 Arbor after her legs got shattered.

Arbor in a wheelchair after her legs got shattered

Arbor, Ryder and Gavin after the dungeons got flooded

Arbor showing Esmae how to wield a sword

Arbor showing Esmae how to swing

Arbor with Misty and Narali

Arbor and her dad, Azreal.

Arbor in her comfy hoodie.

Arbor in Present Day in a black dress.