White
Anuki (aka Niko) is a runaway pet from the upper city. Her journey through Salvation city was full of heartbreak and trauma, resulting in her going into hiding under a new name. Anuki Agnar, adopted daughter of Cleo and Fenris.

Originally going by the name Niko, she was previously "owned" by a "Mr. Dinger" of Trident (whom she referred to as her "Master"). Mr. Dinger was also the former master of Nia, and Anuki was her SO while under his ownership. In Season 2, Mr. Dinger sent Anuki to the Undercity to find Nia and try to convince her to come back to the Upper City to be with Anuki and her former master again. Mr. Dinger's treatment of Anuki was questionable and contradictory, as she seems to have had an affinity for him, but at the same time, she says he kept her locked away in her room and never allowed her to traverse outside. Anuki seemed to be brainwashed to the denizens of the Undercity, and with the help of magic Kee'ra was able to break through to her, getting her to admit she wanted freedom.

Mr. Dinger came to the Undercity personally to retrieve his "property" and after a prolonged conflict he was killed, leaving Anuki homeless and without an ID. She wandered around the Undercity, Row and the Wasteland, until having an argument with Nia, running away and eventually running into FL0UND3R, who took her back up the Upper City.

After some time spent with Atlantis, and witnessing the horrors of the aliens attacking the Upper City, she fled back down to the Under City and reunited with her friends there.

In the year since the alien invasion, she was adopted by Fenris Agnar and Cleo Patnya, and changed her first name to Anuki.

She has spent her year between the Grove and the Coven. Since taking over other duties she has learned to run Fenris's food stall in the fire district, although she is a poor cook, she can mostly work a microwave. Fenris has spent much of the year teaching her Gathering. Now after a year in the undercity, she is starting to gain the confidence to take the first steps to resolve her traumatic past, and find familiar faces again. Perhaps even shedding her disguise and returning to face Trident.

Her relationship with her former lover Nia was never rekindled, but she has found her to be an easy friend.

Among those she has met in the undercity, Esperine stands out as the only one with whom she shares a dark secret. The secret of Dusk's Daughters.[1]

Out of Character Trivia

Anuki was originally a character from Nia's backstory, but residents from the Row mistook her for an Upper City slaver, and attempted to kill her when she first appeared. It was the intervention of Cleo that caused Anuki to be rescued.

Anuki revealed her shadow affinity in the epilogue of Season 2. It had been previously noted by Masaru employees that she had some kind of affinity. When attempting to reveal her affinity in the Coven, Esperine broke the Magic Scanner. 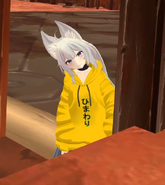 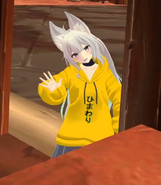 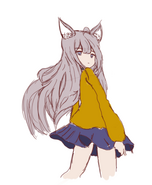