Amika is a roleplaying character portrayed by the Twitch streamer zMimika using the VRChat name Mimika.

Amika is a living weapon whose only purpose is to eradicate life completely. She has no other memories. She is so powerful that she is able to exterminate life on a planetary scale, as the only memories she does possess are the countless lives she has destroyed and the blasted ruins of the civilizations she has sent to inexistence. She is a catgirl, possessing cat ears and tail in all of her forms.

Amika stood in the swirling dust of a dead world. Her duty was almost complete. Only two lifeforms remained, both of them stalking her through the shadows of collapsed buildings and husks of burnt-out vehicles. Their annihilation was already guaranteed, for with no life left on the planet, they would soon starve. But it was not her duty to stand back and wait for the inevitable. It was her duty to destroy. Consumed with vengeance, her two hunters were powerful to have survived thus far. She did not know what form they would take, but whichever form they chose, she almost relished the heat of the coming battle.

Then, in front of her, an anomaly appearing from a tear in existence. Climbing out of the portal was a boyish figure with demonic horns and tail. Curious about the mysterious figure, Amika held her deadly lasers. He introduced himself as Azreal, and gesturing toward the portal, asked Amika to follow him through. She took one last glance around the devastated planet, and nodded in compliance. The pair stepped into the portal and they were whisked away to another existence.

Crawling from the shadows, her two hunters, the last living beings of this tomb, approached the portal. They, too, entered.

Amika found herself alone in Club Rogue. Her sensors registered immense power surrounding her, as the club was packed with powergamers. She readied her weapons, knowing she would die in the coming battle, but it was her duty to destroy. Then, there was a vampire boi in front of her, asking if she was okay. Once again, she hesitated. She was surprised by this hesitation. She had never been able to control her destructive urges before.

The boi was named Satchi. Sensing she was on edge, he took her aside and calmed her. Satchi inquired who she was, and she robotically explained how she was a goddess of death and would annihilate all life. Satchi stated that must make her incredibly lonely. Amika did not even know what loneliness was, and so Satchi explained to her about what being lonely meant. Amika realized that was indeed the way she felt. She said that was her duty, however, because all she knew was death. She readied her weapons again. However, Satchi smiled and said he could introduce her to the beauty of life. Taken in by his kind smile, she realized she was very curious about life. She promised not to attack anyone for now and accept his offer. Just then, however, her sensors registered a familiar signal. She glanced around, searching. It seemed the two hunters had followed her here. She could not let the pair cause a battle that would break her promise to Satchi already. Quickly promising Satchi that she would go on a date with him the next day, she retreated, pursued by the hunters.

She ran for hours, knowing if the hunters caught her, she could destroy an entire city by accident and break her promise to Satchi. However, appearing before her once again, Azreal appeared before her again. Helping her escape, Azreal took her to the Void. This was a place the hunters could not pursue her, and for now, she was safe.

The next day, Satchi and Amika had a date as planned. The date was mostly childlike in nature, playing games like battle discs and capture the flag, but at the end, the Legion forced Satchi to romantically kiss her. She was confused by this action, and asked what it was. Flustered, Satchi tried to explain what a kiss was to her. The explanation was not very clear, as Satchi is fairly innocent when it comes to romance. He said that a kiss was a very important thing, to show affection and love, but realizing this would mean Amika would go around kissing everyone, he added the stipulation that while other people might kiss you, and that was okay, you should deny kissing anyone except who you really trust. He went on to say you should remain pure and only kiss one single person. Kisses were not something you should just throw around willy-nilly.

Amika was taken in by what the kiss meant, by Satchi's definition, and how important the vampire was to her.

Later that night at Club Rogue, Satchi explained to her that he was dealing with a problem as well. The rapier he possessed was a cursed blade, and the spirits of the previous bearers of the blade whispered to him. He could not control his actions at times, as this Legion took full control of his actions. Realizing she could help, Amika took Satchi to meet Azreal. There, Azreal gave Satchi a fragment of chaos, an orb of energy of the Void that he claimed would help Satchi resist the Legion's influences. A friendship blossomed between the trio.

For a few days, Amika and Satchi became companions, traveling at times to the Void to meet Azreal and defuse many potentially destructive situations between SciFri and the demon. At the same time, while speaking with various visitors to the club, Amika learned more and more about the beauty of life. She found these new emotions coursing through her to be wonderful, and with Satchi's support, realized that she had a choice not to be a weapon of death. She could redefine herself.

However, then she observed Satchi kissing a red-haired girl named Ashunera. Yet another emotion flooded her being. Satchi had told her that kisses were important, and you should only kiss one other person, the one you trusted the most, but here was Satchi kissing someone other than Amika. It was Amika's first taste of betrayal. Her weapons came online, and she prepared to destroy this world. At the last moment, however, she directed her deadly weapons to the atmosphere, harming no one.

Going to Azreal in the Void for advice, the demon defined to her what betrayal was. He said that while what Satchi had told her was completely true, dishonesty and lies could obscure that truth from the observations of others. He said Satchi was a liar, and that the vampire could not be trusted by Amika. Understanding this new information, Amika kissed the demon.

In return for her loyalties, Azreal summoned one of the hunters pursuing Amika to the Void. Since the Void existed outside of reality, the pair could battle easily here without worrying about destroying anything. Although the battle was intense, pushing Amika to the limits of her abilities, she prevailed and killed the hunter. Now only one hunter remained.

Amika has spent time since conversing with others and learning more and more about life, love, and emotions, all of which she values very highly now. She met SciFri, and was informed that Azreal could not be trusted. Amika realized that Azreal could be a liar like Satchi, and the kiss he gave to her was invalid as well. Furthermore, Satchi pledged his loyalties to Azreal, and so Amika could not find herself fully supporting the alliance. Instead, she sided with SciFri, and told him everything she knew about Azreal. She is now determined to battle and destroy Azreal if needed.

She has since met KimplE and KimplE gave her another viewpoint on life. It seems whatever KimplE told her has put her firmly in KimplE's corner.

It is unknown whether her current loyaly to SciFri is true or guided by Azreal. Perhaps Azreal convinced Amika to be false and lie to the holy knight, and the alliance is a total charade. This scene occurred off-stream, so the contents of it are unknown.

Amika has amnesia and cannot remember her past beyond the last civilization she destroyed. She has only been an instrument of death before, so life is a full mystery to her. Because of this, she can be misled easily, since she takes what others tell her at face value to be the truth. This made her a dangerous instrument in the struggle between Chipz and Joey during the events of Cycle 6, most often used as a tool for one party or another. It also means that if something is explained badly to her, it can lead to all kinds of troubling situations.

It is theorized that the world Amika was destroying in her origin story was the world at the end of the First Cycle. Azreal has told Amika multiple times that she is from the First Cycle. Amika is perhaps the tool Azreal used to cause the disaster that caused so many problems in the First Cycle. It has been revealed that Azreal and Amika were lovers in the First Cycle. The reason Amika only has memories of death might be because Azreal stripped her of her memories, in order to make Amika his complete pawn. This could also all easily just be lies Azreal is feeding Amika, since he is a known manipulator and liar.

Amika and KimplE's armor are the same. This has led many to speculate the pair might be in cahoots with each other, but it is pure coincidence. Amika had her armored model being worked on weeks before KimplE chose the form, it just happens they picked the same model to form their respective avatars from before the pair had met each other. It is later revealed near the end of Cycle 6 that Amika is actually a physical manifestation of Kimple from Cycle 1, explaining their armor being similar. 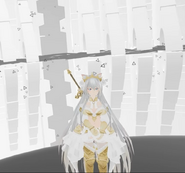 Amika in her alternate pocket dimension.

Amika in her alternate pocket dimension.

Arcadum and Amika.
Community content is available under CC-BY-SA unless otherwise noted.
Advertisement