Not to be confused with: Mari

Amara "Mari" Mauler is a half dragon blacksmith from the Under City. Originally growing up in the harder part of the Under City, after a tragic event that left her orphaned and without a home she was whisked off planet to live with her Uncle for the past 13 years.

She has since returned to the Under City to put her education to work as a blacksmith and do her best to make the lives of the residents there a bit better. In secret, she hopes to find an anti-corporation group to join and enact some revenge on the devastation they caused in her life all those years ago. 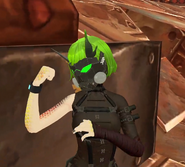 Before fighting in the Scrap Town thunderdome arena

After the fight, recovering at the restaurant with Hank