"Round and around they go! Into THE STORM of the UNKNOWN. " ― Alizarin to a washing machine, casting a "spell"

Alizarin is a relatively newly built synthetic. Stolen from somewhere by an unknown assailant and dropped off near a cave in the wastelands he woke up 6 hours later, still fully charged but very confused.

Going by Alizarin his real model number is CR1M-50N, designation "Crimson". He has some weird quirks about him, but his main one is thinking that Tech is Magic, and Magic is Tech... In other words a robot who believes that he can do magic. If you try to tell him otherwise, he will not believe you!

Working as a mercenary and scrapper in the wasteland a year ago, he continues looking for the assailant who dropped him off, thinking that they're also his creator. 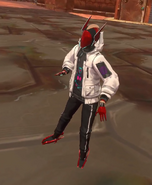 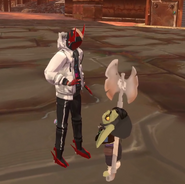 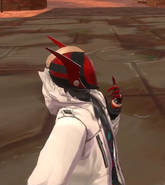 Alizarin and Anna in "disguise"