Akeena is a hunter and catcher who grew up with her tribe in the wild jungles away from civilization. She has difficulty adapting to modern technology and doesn't understand or fully speak the common languages. She uses stealth to sneak around.

She is GearBell's RP character in Callous Row RP.

Akeena grew up with her tribe in the jungles. Her tribe, deep in the jungle, is located right next to a large deposit of crystals. The crystals are common enough to them that they use them as tools, jewelry, and ceremonial items. They have no idea how valuable the crystals are to the outside world, to them they are as common as wood. Akeena wears a Tali crown, a ceremonial piece the daughters of the tribe chief wear, with 3 crystals - a detail to show she is 3rd in line to lead the tribe. Akeena is one of four sisters in line of the tribe leader. Feeling too restricted by tradition and ceremonies, Akeena was not happy with her life as a Tali. Bored of her responsibilities she often went out hunting. It was the only time she felt free enough to do as she wanted.

Charles was on a hunting mission in her jungle, though he did not know of her or her kind. At some point he lost his supplies and had difficulty hunting the local wildlife. From the treetops she spotted him and began to follow him from a distance out of curiosity. She saw he was trying to hunt, so she low-key caught some animals for him and left them for him, still trying to be unseen. Noticing the mysterious pile of animals to eat, Charles helped himself. Declaring the hunt over, he returned to his transport and Akeena followed, still in stealth. She snuck in and they took off back to Callous Row. Once there, he exited the transport and she escaped outside. Now she is running wild around the city, lost in this world that's new to her.

Lost in the modern world she eventually found her way back to Charles Rask's home and, although a difficult language barrier needed to be overcome, made his shop her new home. Spending time together they befriended each other and Charles is slowly teaching her the language.

Trying to figure out her origins, Rask got her to follow along to Jack Montagne's shop. There they took an involuntary blood sample to search through the databases for her DNA. Surprised to suddenly get blood drawn, she sensed a threat and acted hostile until eventually calming down.

Exploring the newly opened up lower mushroom forest of the Undercity below the slums, she had a vision from her ancestors in the form of an elemental that spoke to her. The vision accused her of having left her people behind they were suffering because of it. She tried to respond and apologize, and she was told that "birds of thunder and storm have ashed our forest", learning that her homeland had been attacked. The fading vision told her that she must seek vengeance and return the anger of her people.

When following the tracks of The Necromancer, Charles and Eros got bit by mushroom-like zombies and were poisoned. Knowing how to deal with snakebites Akeena did her best to suck out the poison. Charles was cursed and his skin darkened, but both of them managed to survived partly thanks to her. 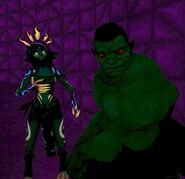 Jack Montagne gathers a blood sample to try and learn more about Akeena, her species and language 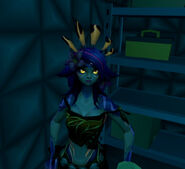 Akeena treats Eros after he was bit but undead 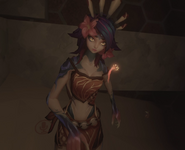 Add a photo to this gallery
Retrieved from "https://vrchat-legends.fandom.com/wiki/Akeena?oldid=88054"
Community content is available under CC-BY-SA unless otherwise noted.