Female
Ais is a demon who intends to make the dark world of Callous Row a little Brighter. She runs a sweet shop named Happi with the assistance of her follower Rin Takemikazuchi. She makes a decent middle class living in Callous having an apartment above her sweet’s shop. She is portrayed by Zurui.

Ais lived in Callous Row all her life. She grew up with her grandfather who was a very kind man. He always told tales of a land of only sweets, where gumdrops were the size of busses and marshmallows the size of boats. He did what he had to do for them to be stable, saving money to the side so that they could move further up in the world. On his way home from 'work' one day, he was tragically murdered by a gang. Ais lost the only family she had left but gained a follower, Rin Takemikazuchi. The two were unable to find the culprit who had murdered her grandfather, so she invested the money her grandfather had saved - which was more than enough for herself to move from Callous Row - into a sweet shop instead. She spent a few months getting everything together, but due to her grandfather's aid in his passing the land that he would tell tales of was now a small piece of reality. The shop was opened and curious customers now come in for their sweet treats. On her off days, she's either mugging someone in bitch mode or snuggling up to a bag of sweets in her apartment watching the television in her cutesy personality. Rin? He's usually doing stuff or just... there.

Welcoming Rook into her Cupcake shop 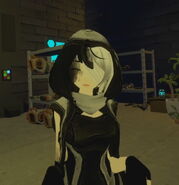 Ais, Rin, Kythus and Felix are recruited by Rook. 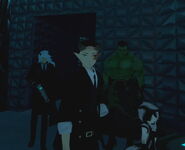 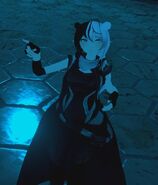 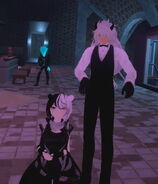 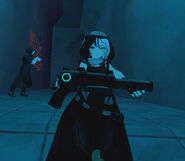 Ais turns the weapon used by the Corporate droid over to Rook
Community content is available under CC-BY-SA unless otherwise noted.
Advertisement