Aima Yinnow is a tall and energetic human man that serves as a new mayor for Cari Town. He is very friendly with the townspeople except with the elves to whom he has shown contempt and disgust but without escalating these expressions. Although he could seem very carefree and simple minded he take his job as a mayor serious despite all the deficiencies he might have.

Aima Yinnow is in reality part of the noble Aima family which seem to have enough influence to make him the mayor. he and his brother, Aima Prof Essor, grew up together under their parents in the Federation De Reudes, up until his parents divorced. At that point, Yinnow's mother took him and moved to Noria, while Essor stayed with his father in the Federation. The two brother have maintained their bond over the years and still try to keep in contact with one another.

At some point in his past, Yinnow found a lady he thought he loved and they got married. At some point after the marriage, his wife tried to kill him; stabbing him in the chest and eye, taking his money and running away with it. Yinnow believes that she was later found, tried, and executed. This left trauma with Aima, leading him to look down upon women that have a lot of money and will do anything for it.

Aima Yinnow was appointed as Mayor of Cari Town in the middle of the renovations, replacing the old CAF Administrator. Aima isn't the most knowledgable at management and organization so many of the managerial needs for the town fall on the shoulders of his assistant William, but his presence certainly makes an improvement on morale.

The first day that Cari Town was reopened after the renovations were finished, he spent much of his time getting to know his new citizens. Much of his day was occupied dealing with a group of mischief makers that entered the city though. At first they seemed to be a likeminded and friendly sort, but word came of an attack perpetrated by the gaggle on another Adventuring party. Following this revelation, the trio was lured into a cell with nachos and with promises of safety from the glowing rat hordes that roamed the streets by this point, and they were arrested. Unfortunately, they escaped in the chaos after stealing a guard uniform and getting the key from him.

Aima checking the lamps on his first day

Mayor with the robed potion 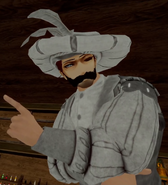 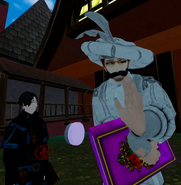 Aima squatting to talk to Lnik

Aima on the guild

Aima and Lnik face to face

Aima dejected in his office