White
AIM-3 or Amy is a robot sawbones surgeon living in the underground of Callous Row. She operates her surgery business in a train car in the abandoned railroad station. She lives a low class lifestyle hiding out as she technically shouldn’t exist. Her purpose is to survive and prove that she is not a failed episode. She is portrayed by Nekobot.

She was recruited into "The Shattered Legion", a resistance organization led by Rook that is gathering allies to battle the mega corporations.

The first prototype of the AIM-3 product line, she was a radical redesign of the AIM-2 medical android. The AIM-3 project was terminated in favour of a more incremental enhancement of the AIM-2 design; Also known as the AIM-4. While in the process of being discarded, an engineer taking notice of her sentience, instead dumped her in Callous Row. 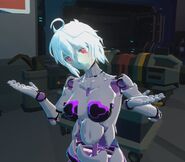 Recruited into "The Shattered Legion" by Rook

Rook tells Static and AIM-3 to prepare for a raid on a Mars corporation patrol. 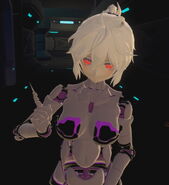 Treating Jack from a gunshot wound.
Add a photo to this gallery
Retrieved from "https://vrchat-legends.fandom.com/wiki/AIM-3?oldid=73052"
Community content is available under CC-BY-SA unless otherwise noted.